Final Fantasy Tactics: The War of the Lions Review

War in the Pocket

Nearly ten years ago, players first got to experience the world of Ivalice through the exploits of a young man named Ramza Beoulve. The game was Final Fantasy Tactics, the vastly different successor to the recently-released Final Fantasy VII. Gone were the full motion videos throughout the game, the varied cast of unique characters, the exploration of dungeons, and even the overworld map itself. In their stead were planar battlefields that seemingly float in space, and player-created armies that clashed realistically in a hybrid of turn based and ATB combat. This extreme change in visuals and gameplay was a bit much for some. But for others, it was a treasure that could only be found in used game shops, if at all, and often cost more than when it originally sat sealed on store shelves until getting re-released as a Greatest Hits title. Though the game was scarce at one time, gamers are once again invited to the war-torn land of Ivalice via the PSP in Final Fantasy Tactics: The War of the Lions, and this time, it comes with beautifully animated story sequences, a couple new characters, and a freshly translated script.

The plot follows the aforementioned Ramza, the youngest son of the noble house of Beoulve, and his best friend Delita throughout the titular War of the Lions. History records Delita as the one responsible for bringing an end to the bloody conflict, but the game’s narrator thinks the true hero is actually Ramza. After a short tutorial battle that takes place in the middle of the plot, the game shifts back to when Ramza and Delita were still just cadets at the Akademy. From there, Ramza and a few novice soldiers begin a journey that eventually sees the end of entire armies and villains with supernatural powers.

Final Fantasy Tactics features a class system similar to that seen in some other games in the series. All jobs begin at the lowly squire or chemist class. Squires are the gateway to all things physical, including knights, monks, ninjas, and dragoons. Chemists eventually yield mages, summoners, and arithmeticians; magic users that use any acquired magic on targets determined by such things as the unit’s level or location. Characters acquire Job Points in battle, which allow skills to be purchased in any order and even open up new classes. All in all, there are 22 different classes to master, and each character can also choose a sub-skill from any other attained class.

Like other tactical RPGs, the bulk of the game takes place on the battlefield. After placing up to five characters on set starting spaces, battle progresses with turns happening based on each unit’s speed. Faster characters get more turns than slower ones, and play usually follows one side moving before the other, though this is not always the case. Units have a set range and can only select one location per turn. Should you get there and decide that probably wasn’t the best choice, the unit is stuck in place until its next turn. Thus, all decisions to move are critical, and mistakes can be costly. 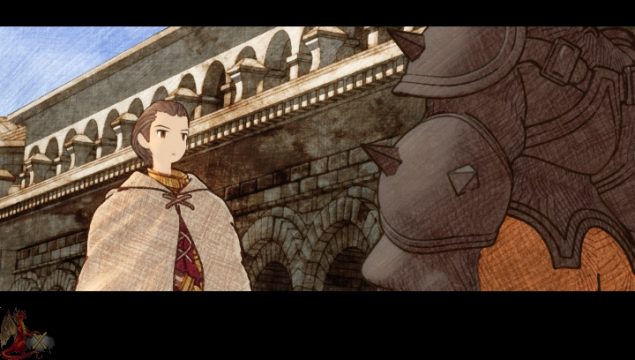 Delita was clearly unimpressed when he discovered why they call me Captain No Pants.

Once in place, characters can pick from any of their available actions. Simply attacking results in an immediate action, but most special abilities, particularly those of the magical variety, require some time to charge before being unleashed. The charge time can easily be checked to decide if it’s worth doing that move, since a unit preparing an action is highly vulnerable to attacks of any kind.

Like most games in this genre, Final Fantasy Tactics has a twist on combat. Units felled in battle have a counter above their body. After three turns, that unit will either turn into treasure chest containing a piece of equipment, or a crystal, which can either restore the HP and MP of anyone that acquires it, or transfer all learned skills to the finder. Those who meet that fate are removed from the game forever, so care must be taken to revive fallen allies or finish the battle before their timer runs out.

Most battles are won by defeating all enemies, but some can be won by just defeating a single key enemy. These battles are generally what defines the game’s variable challenge. Some are pretty easy, but others can be punishingly difficult. Without a proper strategy and suitable equipment, some battles are nigh impossible. To make matters worse, there are stages with multiple battles where the player is invited to save in between combat. Though the player is allowed to re-equip characters and choose different classes or skills, the party is not permitted to travel elsewhere to level up. Woe to the player that overwrites his only save file during such a battle; unless a successful strategy can be devised, your only recourse is to start again from the beginning.

When not in battle, the rest of the game takes place in menus. This even includes the towns that are scattered throughout Ivalice. Shops are nothing more than a menu with a backdrop. The same is true of taverns, which yield backstory and offer sidequests that give money and job points for completion. The rest of the time will be spent customizing your party one character at a time. This takes place in yet another menu and serves its purpose well.

Visually, Final Fantasy Tactics: The War of the Lions is almost indistinguishable from its original PS1 incarnation save for the flawless stretch to a 16:9 screen ratio. As such, the graphics are not exactly the most advanced seen on the PSP, yet for some reason, most special attacks bring battles to a crawl for their duration. While someone not familiar with the pace of the original game might mistake the slowdown for dramatic pause, experienced players will be bothered a bit by the constant drop in pace. Fortunately, it doesn’t detract from the game very much, but it is the one major flaw in what is otherwise an excellent port. This is particularly strange since the PSP’s hardware is vastly superior to its eldest console brother. 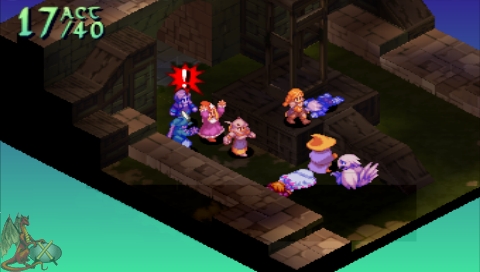 The party was going fine until Marty decided to dress up like a Chocobo. A BLUE Chocobo…

Though it loses a point for the slow battles, the animated cut scenes more than make up for it. In a word, they are gorgeous, and fortunately, they frequently replace what were previously in-engine sequences for plot development. In all, there are probably around ten, and they are fully voiced. Not only that; the voice acting is quite good and is a welcome addition.

For those that enjoyed the original score by Hitoshi Sakimoto, rest easy; the soundtrack still sounds great, even through the PSP’s tiny speakers. Sadly, there are no new songs. The sound effects sound slightly different this time around, but it neither adds nor detracts from the original game. Luckily, the music is great, but it can grow a bit stale by the end. You will hear a handful of tracks over and over by the game’s conclusion.

For those that have already played the original Final Fantasy Tactics, most will agree the game’s highly political story stays interesting to the finish with all its twists, turns, and backstabbings as Ramza and company unravel the plot surrounding the mysterious Zodiac Stones, around which the game centers. In what is arguably worth the price of admission alone, this time, there is a new translation. And this time it even makes sense. No longer will characters stupidly utter “I got a good feeling!” and then find a piece of treasure hidden in a rock. Now everything actually flows, but considering the script has been put in a dialect that is fitting for the time period and setting, it still might take some deciphering to understand. An interesting effect of this is the way it separates those born of high blood from commoners by the way they speak. This addition brings just a bit more depth to the plot and is a nice touch.

Completing the game can be done in as few as twenty-five hours, but most will find that it takes at least thirty. Those that want more can have their game extended quite a bit longer. The PSP incarnation adds two new classes to the mix. Dark Knights take considerable leveling to unlock, and the Onion Knights require even more to be useful. Considering the work required to use these classes, it is entirely possible to finish the game the same way it was played on the PS1. And those that find the main plot too easy can explore an optional dungeon filled with extremely powerful foes and a hidden boss. There is also the option for versus and co-op play, but this requires having a friend with another PSP and a second copy of the game. There are some things that can only be accessed by playing with a friend, but it’s nothing one can’t live without.

In conclusion, fans of the genre that missed Final Fantasy Tactics the first time around are highly recommended not to let it pass them by a second time. Those that fell in love with the game back in its PS1 days will probably find it worth another play. If tactical RPGs aren’t your cup of tea, you won’t like this one; as its title suggests, it is one. Otherwise, this game is perfect for on-the-go battling.