Fallout by the Numbers

Bethesda’s latest offering has been in development for years, but was only officially revealed a few months before its release. Fallout 4 takes place in Boston, known simply as the Commonwealth, and has players take the role of a vault dweller who was alive before the apocalypse hit. Now rising from the ashes, this survivor must come to terms with how the world has changed, as life as she once knew it has changed greatly. However, while the world has changed, war and Bethesda’s Fallout do not.

The game starts off before the bombs drop with players creating their character against the backdrop of a classic 1950s style home, choosing either to control the husband or wife of this nuclear family. Before long, players have to leave their home with their spouse and child to avoid the fallout and make their way to Vault 111. After a few key bits of exposition, the vault dweller makes her way out of the vault into the Commonwealth seeking to find out what happened to her son. The world above is no longer the peaceful place it once was, but a wasteland that is home to ghouls, raiders, super mutants, and all manner of vile creatures familiar to fans of the series.

It is within this main narrative thread that Fallout 4 suffers the most, as the player’s search for her son is the sole motivating factor for much of the game. All of the other characters and factions who are interacted with are simply incidental players in the path from point to point. Within the first few hours of the game it’s possible to join up with a local militia called the Minutemen or to begin assisting the Brotherhood of Steel, but there is no conceivable reason why a parent new to the wasteland and desperately seeking a lost child would want to waste time running errands for these factions. Yet for some reason the player goes from being a nobody to a highly sought after warrior so fast that it kills any build up the game is trying to create.

In Fallout 3, one of the most game defining moments was dealing with the town of Megaton. Early in that game, players are given the option of deactivating a nuke in the middle of this thriving settlement or setting it off and killing everyone inside. The key figures on each side of this event entice the player to help their side. For a simple, optional side quest there is a lot of depth in the way players are allowed to handle this situation. The problem in Fallout 4 isn’t so much that it doesn’t live up to that quest, but that it doesn’t even attempt its own Megaton moment. Side quests generally lack any sort of gray area and rarely have any lasting impact on the game. Main quests and faction quests are usually pretty straightforward, leaving players to wonder how many fetch quests or slaughter missions there will be before the next bit of story. There are tons of side quests to fill the void, but most are just combat-focused smash fests instead of complex dialogue-heavy ones.

Part of this is likely attributed to the fact that the main character is now voiced, so whether one plays as a man or a woman has a positive effect on the personality of the responses. It can’t be said that Bethesda skimped on the amount of voice work, as there is a lot here, but the problem comes from how replies were simplified. Instead of offering three or four options along with additional replies based on the character’s attributes, there are now generally four replies that can be given. These typically consist of an agreement, a disagreement, a sarcastic reply, and a question. Occasionally there will be special replies that having high charisma and intelligence can assist with, but they feel arbitrary and usually don’t have a lasting impact. 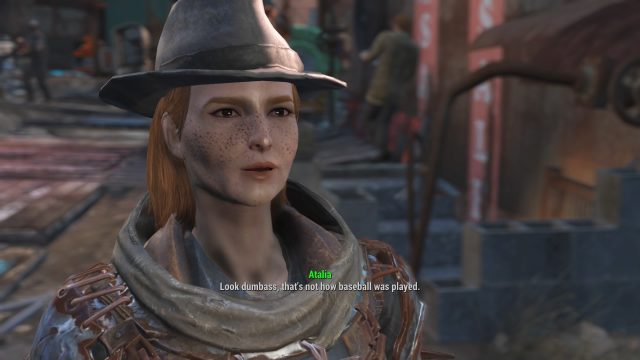 Even in the future Red Sox fans take baseball seriously.

Companions are back again, with many of them taking a key role within the story. While there are quite a few to choose from, only one can follow at a time, making the interaction required to get to know them better somewhat limited. How followers respond to the player’s actions will depend on their personality, so it’s best to pick one that approves of the chosen playstyle to get the most out of them. The cast is quite varied, but many of them are fairly one dimensional with few opportunities to get to know them as well as would be preferred. In combat, they can be handy, but will often get trapped in the environment due to inaccurate pathfinding. Thankfully, if they get too far away they will simply pop back to the player. Companions can be directed to move around and interact with objects, which is a handy way to make up for any deficiencies the main character might have, but their combat tactics leave a lot to be desired.

Like the last two Fallout games, Fallout 4 offers plenty of combat options. Big guns, melee weapons, laser pistols, and sniper rifles are all back in force, as is the V.A.T.S. system that allows players to avoid shooting from the hip and instead slow down time and use action points to target key areas. It’s a great system that helps Fallout feel less like a straight shooter and more like the RPGs it spawned from, especially if players choose to focus on key perks to make it work more effectively for them.

One big change in Fallout 4 is that power armor is now much more complicated. It’s not just another item to take up inventory space, but instead acts like a vehicle that players can get in and out of as desired. It’s super powerful, protects from radiation, and looks great, but to keep it from being overpowered it requires a rare, expensive fusion core to run and needs to be repaired at special stations when damaged. While this is a nice change, power armor now feels less special, especially considering how early on players can gain access to it and how limited its use is.

Outside of combat, looting is much easier in Fallout 4, as the player need only hold the cursor over fallen enemies to select what to gather, without having to go into a separate menu just to see what’s available. That said, prepare to have the same old inventory management hassles as before as it’s as easy as ever to overload on items. There are more options for storage than just weighing down companions at least, as players can choose to have their own quarters in certain areas or even build their own settlement if desired. In fact, there is a town building mini-game within Fallout 4, but the interface for it is fairly cumbersome and unintuitive. Thankfully, it is mostly optional with the exception of a major quest within the main storyline that requires players to loot a specific combination of junk and build a selection of items in order to progress. The interface just doesn’t work well with a controller, so the entire process is more awkward and frustrating than it should be. 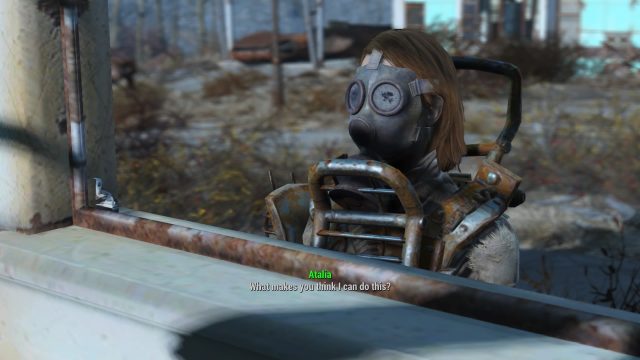 I found myself asking the same question quite often.

Those worried about the stability of Fallout 4 should understand that, while their mileage may vary, this seems to be the most stable of Bethesda’s offerings on console out of the gate. During over forty hours of play there was only one random crash, two moments of noticeable slowdown which were remedied quickly, zero instances of getting trapped in geometry, and no quests glitching out. The only real complaint on this front, outside of the aforementioned companion pathfinding, is the long loading screens when fast traveling, entering a new area, or restarting after a death.

In terms of presentation, Fallout 4 might not be the best looking game in the world, but it is far from offensive. In fact, it was quite easy to make a decent looking character, which is something many games that offer character creation still struggle with. Areas do have a tendency to be pretty repetitive, so the art direction doesn’t get as much of a chance to shine as it should. There are some later areas that help balance things out. The music and voice acting are pretty solid, though. Diamond City Radio is the main station in Fallout 4 and is blasting some fantastic ’50s hits like its predecessors. There are quite a few returning songs, but the new selections fit in nicely to make it feel like a more natural radio station even if the awkward, stammering DJ can get annoying pretty quickly.

When critiquing a game like Fallout 4, it’s hard to do so in a vacuum. If you’ve played Fallout 3 or New Vegas, you’ll constantly have those games in mind as a point of reference. The problem comes from the fact that this feels like more of the same, not a step forward. Fallout 4 doesn’t break the same new ground Fallout 3 did with its jump to 3D, and its storytelling and intricacy of choice fall short of what New Vegas offered.

Fallout 4 just feels safe, even when trying new things. The addition of a voiced main character limits the depth of choice too much to be worth the payoff. The warring factions you have to choose from force you down a path that offers no good middle ground to say “screw it, I don’t want to support any of you.” They all have different ideologies, but the outcome for each is just too similar. As such, the main storyline overcomplicates itself into irrelevance instead of becoming a complex web of intrigue like other games in the series have offered. If all you are looking for is more Fallout, with tons of areas to explore and lots of side quests to complete, there is plenty of that here, but be warned that they are not the same deep, entertaining quests offered by the past two games.