The RPGestalt is not currently in the grips of explosive creativity, but that doesn’t mean that weird and oddball titles are a thing of past platforms. Witness Exstetra, a game whose story and battle system are built around a singular sort of human interaction: kissing.

It all starts with the hero, Ryouma, streaming in on a meteoric rainbow and crashing head-first into the heart of a forest with no idea who he is or how he got there. A spear-wielding shrine maiden (of sorts) shows up to inform him that this is the world of Amazia, the reverse image of Earth, and that both worlds are soon to be destroyed by demonic forces. Ryouma is the Prisma, a savior who can absorb mystic energies from fallen foes and use them to empower his allies. First, however, he has to locate these allies as they are teleported in from Tokyo, and then activate them with a kiss. Some obviously take this detail better than others.

In battle, kissing is the way in which Ryouma passes energy to his friends so they can use the really big attacks, though the two male party members stubbornly boycott this option until a boss battle with a gender-biased attack spell forces them to make with the kissy-faces. Power activation comes with a kissing mini-game that is appropriately awkward and difficult to get right, though the configuration menu does give the player the choice to opt out — with specific toggles for girls and for boys. Somewhere in its programming, the game keeps track of how much and how often each character gets smooched, which flags certain minor conversations throughout the game and eventually factors into which character’s ending the player sees after the final credits roll.

Exstetra doesn’t really give much plot beyond this conceptual gimmick, however. While some attempts are made to identify links between the characters during their time in Tokyo, there is little explanation as to the why and how of their arrival in this brave new world, or why they’re the ones who were chosen. There are only a handful of minor B plots, barely fit to pad the time between the major dungeons, and the player’s party might well outnumber the shown inhabitants of the game’s single town. 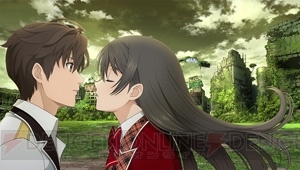 Aside from the regular liplocks, Exstetra attempts to run a fairly standard turn-based combat experience. Positioning and rows play some important roles, but often it is easy enough to set the party to one of the three basic auto-battle options for a turn or two. While individual character options would have been preferable, this is still simpler and less aggravating than the alternative. The game has a large library of buffs and debuffs, not to mention a huge item list with all sorts of options via cooking, but the menus are difficult to work with. At times it’s a bit too streamlined, with vital info on things like stats or abilities often nestled within other areas, like the equipment menu. On the other hand, it can also seem archaic, as it forces the player to go over the same steps from the very beginning, again and again, for any action out of battle that they might wish to repeat, such as cooking or using healing magic.

Because of this, even if the player knows exactly what to do, it takes a while to input everything for a battle turn — and twice as long if any of the party frontliners have multiple actions due to the High Tension status effect. The fact that auto-battle knows the item and spell lists better than the player — and actually makes use of everything — only makes it more attractive as an option. It even bypasses the need to play the kissing mini-game, if that hasn’t been toggled off already, and the right shoulder button can be pressed to fast forward through the action. Then the developers decided to throw a monkey wrench into the works with the Burst mechanic.

Essentially, it’s possible for characters to overdraw on magic or a skill, entering the Burst state and taking damage to their health in order to make up the balance. The fact that later enemies will spam the MP-depletion spells, or that weapon skills have scaling percentage-based MP costs, means that allies will enter this state often. Unfortunately, the AI is stupid enough to pursue the highest-damage attack options, often pulling out the hero’s biggest move (at 88% max MP per use) when he’s sitting at zero magic and not much more health. Unlike the other characters who simply shuffle to the back bench when knocked out, a fallen hero means Game Over. Thankfully, Exstetra lets the player repeat battles over and over, so with a bit of trial, error, and luck, it’s usually possible to win on the third (or eighth) try against some of the tougher encounters.

The one saving grace of this game is its equipment customization. First, all arms and armor can be boosted up to a maximum of ten levels, with the weapon-specific boost orbs being not too hard to find. The armor orbs, unfortunately, are so rare that there’s no feasible way for the player to max out the entire party’s defense, even if every single one is saved for the last level. Every piece of equipment comes with a number of enchantment slots, and each of these can also be boosted up to level ten in order to increase effectiveness. The game even makes it relatively painless, stripping enchantments off of sold equipment for ready recycling, and allowing new enchantments to be applied in the field. Some enchantments are defensive, boosting the protective stats or preventing different ailments from befalling party members. Others are situational, usually allowing preemptive or retributive attacks in the defense of that character or someone else. The rest are additive effects, like poison, critical hits, or draining damage, which all stack with conditional effects as well as each other. So it’s quite possible for the young man with a katana to trigger a preemptive strike that round with six extra attacks, all critical hits, inflicting poison and paralysis, and healing his HP and MP for one-half of the very large amount of damage he’s just inflicted, after which he gets his actual turn for the round (and possibly does it all over again). The long-range attackers have even better odds of doing stuff like this, which greatly increases the party’s chances for survival as the game continues on.

This is very important to note, because despite appearances, in many ways the developers were not trying to make a balanced JRPG here. Instead, it feels like they began with something more akin to a first-person dungeon crawler, and later altered it to a third-person isometric view. Its concept of difficulty level is far more in keeping with that sub-genre, as the Casual and Standard options are really closer to Normal and Hard. Enemy strength tends to jump stratospherically between dungeons, or even floors of dungeons, and the level design itself shows its off-genre roots. 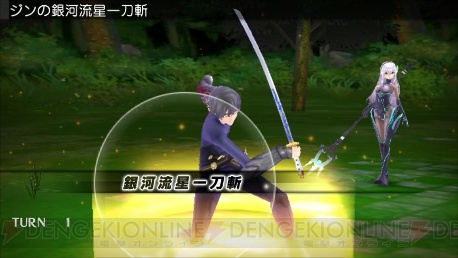 There are six levels of largely identical forest, as well as six dungeons that follow the exact same conceptual plan, only lengthened for each iteration. Each dungeon begins with a ruined copy of some section of Tokyo, recognizable only by the characters’ reactions, which then leads into a series of earthy tunnels, followed by a layer of conventional ruins, and finally a very sci-fi sort of location where the boss of the dungeon is located. The levels have all the appearance of being procedurally generated, without any of the randomness or other supposed benefits. What this means is that, from the first level to the last, there is very little to discern one location from another. Even the enemies remain pretty constant, with a few added every level to a standard list, but as an example, monsters from the first forest will still appear in all subsequent forests, only with a stat boost that makes them initially more difficult than the most previous boss battle.

Exstetra possesses some decent voice acting for most scenes, and even some not-bad animated sequences here and there, but nothing exists in this game that could not have been done on a previous generation’s hardware, and possibly at better quality. Likewise, the music is okay for atmosphere, but there’s nothing really worth mentioning in that regard. It’s enough to make one wonder whether FuRyu bought out one of those companies that specialized in generic PSP dating simulators, and tasked it with RPGs. That would certainly explain the plot gimmick, though not why the main plot turned out so dull.

This title is, in the end, a flop. For the majority of the potential audience, its gimmicks push the boundaries of bad taste into creepy territory, while for what should have been its target demographic, it doesn’t go nearly far enough. The plot ends up being almost exactly as it appears, with one real twist that was telegraphed well in advance and left no impact on actual gameplay, and while all that kissing did produce most of the game’s drama, there were limits to what could be done and still keep the video game equivalent of a PG-13 rating. The full concept for Exstetra would actually have worked quite well as an erotic RPG, and probably would have been a better title for it. Because, at the end of the day, a game so focused on snogging should not be so dull.