Dance Your Worries Away

When looking at Everhood, it’s hard not to get struck by a feeling of déjà vu as it seems to mark every box in the “indie darling of the year” checklist: an atypical battle system, quirky characters, old-school graphics, and music that has no right to be this good. It sports many elements that find their source in past successful indie titles which are now regarded as cult classics, something that is evident from the first few minutes. But the game developed by Foreign Gnomes’ Jordi Roca and Chris Nordgren isn’t a mere homage; its inspirations are used as a lure, dangled in front of players to hook them in and give a false impression of familiarity, just to pull the rug out from under their feet.

In Everhood, players take control of a wooden puppet named Red who wakes up in the middle of a forest only to discover that his arm has been stolen by a blue gnome. Red gives chase to the thief and kickstarts the adventure, which features many twists and turns. Giving more information about the plot would mean stepping into spoiler territory, and this is one of those titles best enjoyed by going in as blind as possible, but the feeling that there’s something more sinister happening in the background is clear right from the eerie laugh prompted by starting the game. During his quest, Red will meet many bizarre characters: a vampire with a bad cold aptly named Noseferatchu, a group of dancing mushrooms that love playing hide-and-seek, and chatty lampposts functioning as save points are only a few of the encounters. Some of them will stop Red just for a quick chat, while others will stand in his way, prompting the game’s most interesting aspect: the battles. 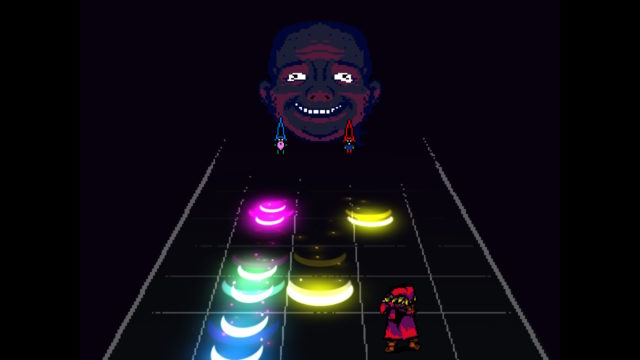 Yep, nothing out of the ordinary here folks, move along.

Everhood‘s battle system is quite unusual: fights take place on a five-column grid where Red stands in the foreground facing his opponent, who sits on the opposite side and sends colored waves according to the music’s beat. Contrary to what may come as natural, the player doesn’t have to follow the rhythm and hit the oncoming notes, but rather has to dodge the attacks in a bullet-hell fashion by either sidestepping or jumping over them until the enemy gets tired and forfeits. Due to its unconventional nature, the battle system takes a bit of getting used to and even the first few confrontations may result in death, but players are free to retry them as many times as they want. Simple as it may sound, combat never gets old, since different types of attacks are thrown into the mix as the game progresses, like waves that can’t be jumped over or that follow a curved trajectory. New twists are constantly added to the gameplay as well, one example being when Red has to go through a cave by riding a cart, which advances by pressing the buttons at the far left and right of the battle grid while evading oncoming waves. Later on players gain the ability to fight back against enemies, a switch in the battle dynamics also reflected by the story’s change of tone from that point onward.

In addition to this, the battles’ presentation is of top-notch quality. Every enemy has its own music theme dictating the pattern of their attacks, making each encounter unique. Since battles are based on music, a lot of emphasis is put on the game’s score, and it shows. The soundtrack has a great number of memorable tunes and encompasses many different genres, with each track fitting both the character Red is facing and the fight’s context. The music’s quality is pretty consistent throughout the game too, even though the standout tracks are reserved for the grand finale. Everhood also toys around with the battle visuals, not refraining from warping, transforming, and adding effects to the arena, so attention is always required to adjust to these sudden aesthetic changes that later become full-on psychedelic slideshows. While for the most part these tricks only add to the enjoyment of the encounters, when coupled with later battles in which the grid is filled by incoming attacks, they sometimes make paying attention to other elements like on-screen enemy banter hard to do. All these aspects contribute to making Everhood‘s gameplay highly engaging throughout the whole experience, despite its apparent simplicity. The game is anything but easy, even in its recommended difficulty, but different options that affect health quantity and its regeneration speed can be selected both from the main menu and in the retry screen after losing a battle, so players can fine-tune the experience to their liking. 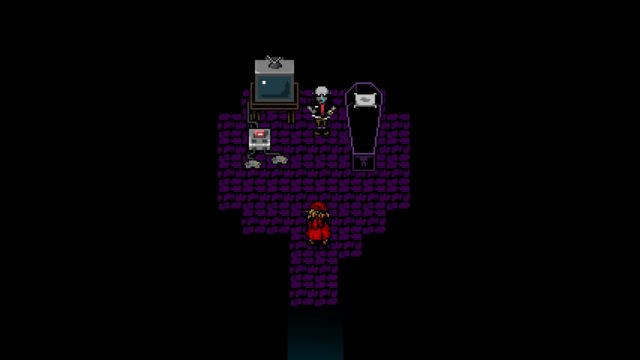 Just a friendly vampire looking for someone to play a tennis videogame with.

While the battle system is a clear deviation from what may be expected of a standard RPG, exploration looks much more familiar. Environments are rendered in 16-bit-style graphics and are rather minimalistic in their visual design, mostly featuring a black background against which the colorful details of locales like forests, carnival fairs, and mysterious castles pop out. The areas aren’t huge, but they are dense with characters, simple puzzles to solve, and mini-games to take part in such as obstacle courses and go-kart races. Each of these events are fun in their own right, but also give rewards when completed, some of which are needed to advance the story. There are also multiple secrets and sidequests that can be found in order to access extra content such as optional fights or tibdits of lore.

Getting to read these pieces of information is highly welcomed, since in Everhood nothing is really laid out clearly, with the game nudging players towards composing their own picture using the few puzzle pieces provided. It’s not uncommon to wonder throughout the adventure whether Red’s actions are the right ones or what exactly is the reason behind them, and even if the story doesn’t give direct answers, it manages to close in a satisfying fashion, also thanks to the impressive audio and visual effort shown in the last act. While leaving the story open to interpretation is a valid approach, some of the choices that the player has to make don’t have the seemingly intended emotional weight. This is because most of the characters are lacking in depth, which makes it difficult to get attached to them, even though they’re a fun bunch to be around. It becomes more apparent during the later stages of the game, where the enemies function more like roadblocks to Red’s progress rather than rounded characters. The fact that the script features multiple grammar mistakes at the time of this review doesn’t help either, but the developers have stated that an update is coming to address this. Another issue is represented by the inconsistent load times when changing areas, which can become quite noticeable in the cases where players have five seconds to look at nothing other than a black screen. 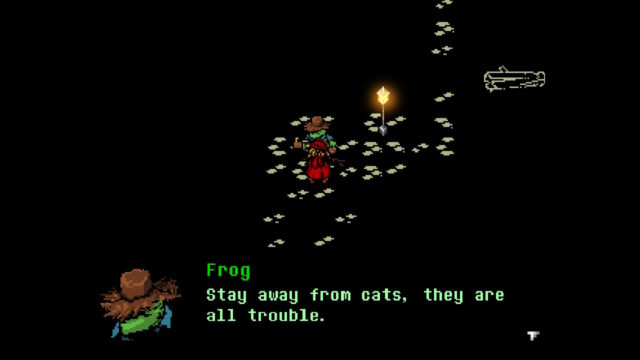 That frog knows what’s up.

These minor flaws don’t really take away from the game’s merits, though. The battle system is a breath of fresh air, managing to be hard as nails for whoever is looking for a challenge, while leaving the option for a more relaxed affair to those who just want to see what wacky encounter lies behind the next corner and enjoy an hassle-free audio and visual spectacle. During its six-hour runtime, not counting the New Game Plus mode that gives access to extra battles, secrets, and endings, Everhood manages to not only distinguish itself from its influences, but also to turn the expectations that come with them upside-down, all to provide an experience that can’t be found anywhere else. Whether or not the game will achieve a cult status remains to be seen, but players itching for something out of the ordinary better not let Everhood slip under their radar.