Try Hunting for a Better Game

Gameloft is a company many gamers are probably familiar with, as they are notorious for creating many blatant copies of popular franchises. The Dungeon Hunter series, which has seen considerable success on the iOS platform, is a fairly competent clone of the Diablo titles, with similar hacking-n-slashing elements. How does Dungeon Hunter: Alliance, the first of the series to appear on the PlayStation Network, fare?

Dungeon Hunter: Alliance begins with players creating a warrior, rogue, or mage and awakening as a dead king who must journey through vast dungeons to slay a nefarious queen. With the help of some clever fairies, players will traverse through several different areas, rousing fairies as a means to gain more power to stop the possessed queen from threatening local villages. That’s about where the story ends, as there’s not a lot of it. The game only offers three classes to choose from, all with very minimal customization in the way of skills that can be upgraded. It seems a bit odd that there are four character slots, but only three classes. If there had been more classes or even some customization outside of set skills for each class, it would be easier to forgive the limitations of Dungeon Hunter: Alliance. However, while there’s a fair number of skills, most of them feel useless and don’t add much to the gameplay.

Dungeon Hunter‘s main flaw is that its gameplay feels very lazy and it suffers because of it. The combat is a simple hack-n-slash, and as players level, they can take on new skills which can be hot-keyed to the square, triangle, and circle buttons. Each skill requires mana, and it’s easy to go through mana fairly quickly. There’s plenty of ways to restore mana, but players will have to take time to do this every few minutes. Character stats are determined by class, though if one plays as either a warrior or a rogue, using potions frequently becomes a necessity due to the sheer number of enemies that swarm players. Combat follows a very simple pattern: hack, slash, a skill here, a skill there, lather, rinse, and repeat. There’s not enough variety in the combat, and although it’s competent, it is very uninspired. 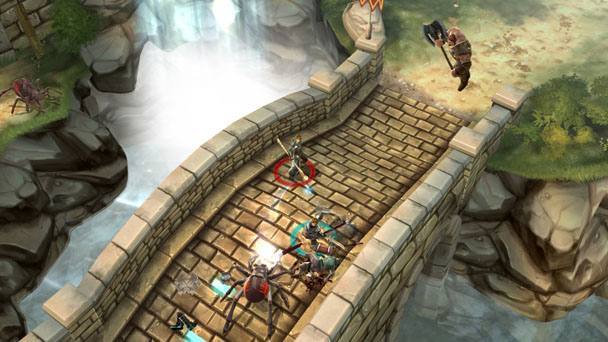 Wow! A not so dark area in the game!

Part of the fun of the third-person looter genre comes from loot collection, and Dungeon Hunter provides plenty for those who like to horde equipment and items. In fact, it’s overwhelming how much loot there is to collect, to a point where it does get irritating to have to sort through it all. Fortunately, players can transmute items for gold without having to return to town to sell all their goods. The game provides four tiers of loot — white which is common with no traits, along with green, purple and gold, each with their own traits which improve stats. The game “conveniently” allows the player to set it up so items of a certain color are transmuted automatically, though there is the small risk of missing out on decent equipment this way. The downside of this feature is the small risk of missing out on decent equipment. It’s not much of a loss, as it does help free up inventory space. The game’s menu sports an easy to use interface, making it simple to shortcut through skills, loot, and stats.

If there is one thing that Dungeon Hunter: Alliance does well, it’s the multiplayer. With there being very few online multiplayer RPGs on the PlayStation 3, the game has tapped the market, and does a decent job at providing an enjoyable social outing. It can be a bit fickle in that players will have to pound X to join into other people’s games after the invite has been sent. Still, doing quests with friends makes this far more entertaining than playing this game alone, which is pure torture. Plus, with the multiplayer, there are always people online to play with who can randomly drop into your game if that option has been opened by the host. Players can also create private games so that only friends can join in. It supports up to four players, and all loot is colour-coded based on which player can pick it up, while all experience is shared amongst the party. It is by no means a perfect online experience, as there was some lag here and there. Still, it is much better to play with friends than to take this boring sucker on single-handedly. 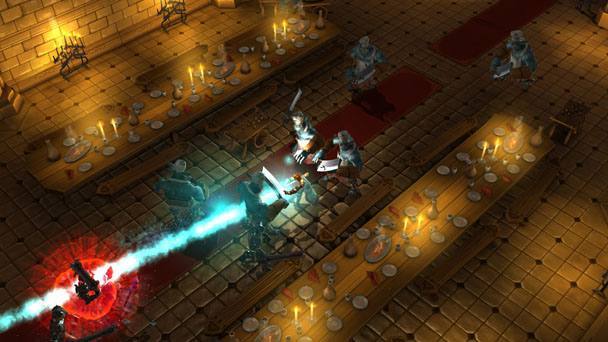 To further add to the monotony, the game’s audio is lackluster. There’s minimal voice acting throughout Dungeon Hunter: Alliance, mostly spoken by random townsfolk to provide inane chatter. It’s presented as flat and corny, and adding to the overall cheese-factor of the entire game . There’s not a lot of music to speak of, but what’s there is completely forgettable. Visually, Dungeon Hunter is passable, though its graphics are closer to a low-end PlayStation 2 title. They work adequately and don’t detract from the overall setting, but there is some graphical clipping here and there.

Unfortunately, Dungeon Hunter: Alliance does have its share of bugs. Enemies will often get stuck behind objects, or stall, which allows for some easy kills. As previously mentioned, the online play does have its share of lag, and having to mash X to enter the game seems counter-productive. There’s also tons of recycling in this game: repetitive dungeon layouts, enemy palette swapping, and even set designs, showing what little effort Gameloft put into the overall development. This type of constant recycling is expected on the iOS, but for the PlayStation 3, a bit more variety in design could have gone a long way. While there are tons of dungeons to explore, it doesn’t feel like there’s enough originality to keep the game from becoming stale. Players can expect to spend at least twenty to twenty-five hours on the main quest, with the Legendary difficulty unlocked after a completed playthrough.

It’s amazing in some ways how a bland, boring, and uninspired game has the ability to be fun when multiplayer is attached. While the online makes for a fun social outing, Dungeon Hunter: Alliance doesn’t do enough to stand out in a crowd. With its uninspired gameplay, joke of a story, and its constant recycling of just about everything, it’s barely worth the $13 price tag. There are better Diablo clones worth your buck, and this is simply not one of them.