This Cave Is Awesome

When it comes to expansion packs, Dark Age of Camelot has a very blackened history — no pun intended. Shrouded Isles brought gorgeous new locations to the game, but its other additions were generic and not very well done. Worse still, many people are convinced Trials of Atlantis is a form of cancer, as it has been a real community killer. DAoC was a fresh, fun, original game at its beginning, but after these two poor excuses for expansions, Mythic Entertainment needed to find a way to make it up to the community. Luckily for them, Catacombs not only ended up being a grand improvement over previous DAoC expansions, it turned out to be one of the best MMORPG expansions of all time.

The first thing DAoC players will notice when expanding to Catacombs is the graphical upgrade to the character models. This drastic update was sorely needed, and now the game’s characters look as good as any other PC game on the market. In addition, the new areas that come with Catacombs live up to the game’s reputation of immersing players in stunning environments. The art direction and graphic quality in the new areas are very impressive. The downside is that most of the old areas haven’t received any touching-up, but with all that was already done to the game’s looks, expecting any more would be unrealistic. Upcoming patches and future expansions will improve the visuals in the old areas anyway; samples of the changes have already been shown.

The immersion created by graphical beauty is assisted by a soundtrack of equal caliber. Rik Shaffer and company produced a musical score that is enjoyable inside and outside of the game, and the tracks are preserved in this expansion. One change was made to the sound; the volume of certain effects seemed to go up while others were slightly turned down, but the level of quality isn’t affected by that. 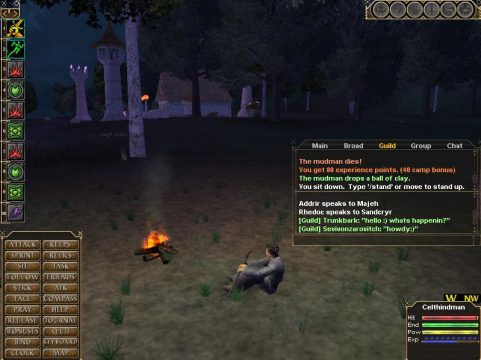 Relaxing by the fire

These changes and appropriate non-changes are fine, but Catacombs would not be the praiseworthy expansion that it is without the content from which it draws its name. Whereas previous Dark Age of Camelot expansions have expanded the world outward, with Catacombs, Mythic decided to show players what lies underneath Camelot. Each of the three realms has been given a new underground area to explore, and all of them are on par with the game’s previously added locations, if not superior. Players will quickly find these new places to be favorite areas, as they use instancing technology — something new to Camelot. This means that a solo player or small group can walk into the dungeon and make it their own personal hunting ground. There is no longer any need to pick a spot and “camp” it. Groups enter and clear the dungeons at their own paces with no worries of anyone else trying to steal kills or loot. Exploring one of these underground areas is like a vacation from the hectic life above.

Another lovely blessing coming from the catacombs is the fact that the play inside them takes some edge off of the level grind. The EXP rewards for completing the assigned tasks is just right, and leveling rate is nearly perfect for those that finish them.

Players of just about any level can explore the catacombs and find useful activities. Such a concept was lacking from DAoC’s last expansions, particularly Trials of Atlantis. Unlike the past upgrades, new players can get into the special content of Catacombs right away. Additionally, the five new classes give upper-level players reason to create a new toon and relive some of the earlier adventures the game offers.

Upon doing so, said players will notice that some additions have been made to the game’s older dungeons. Many of them now come with a new wing where the enemies drop a different kind of coin. This special currency, called “Aurulite,” is used to buy things from special merchants. New lighting effects inside these dungeons will also come as a pleasant surprise. 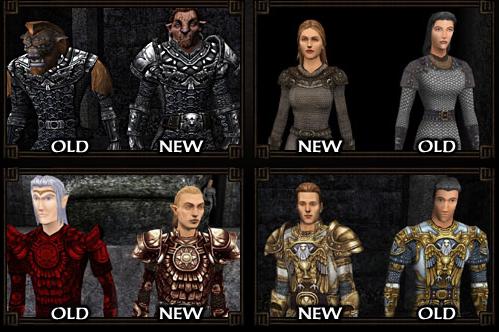 The new classes introduced by Catacombs are unique from the rest and pack plenty of originality. Things like the all-female Bainshee, which uses screaming to cast magic, and the Vampiir, which can’t receive support buffs from allies due to its ability to draw them from foes, add to the variety of enjoyable routes to take with one’s character development. Old and new players alike can also find something to love from among the other new classes of Heretic, Warlock, and Valkyrie. They don’t revolutionize the game, but are a welcome addition.

Hardcore fans of the game’s Realm vs. Realm battles might have legitimate reason to bark about not getting any new toys in the RvR combat. Mythic has been addressing this issue, as recent patches have made this issue a central focus. Furthermore, there were so many other upgrades to the game in other areas, one could hardly expect more out of a single expansion pack. Dark Age of Camelot already has the best PvP in town; future patches and expansions will maintain things just fine.

Simply put, Catacombs is the best MMORPG expansion in recent history, and one of the best of all time. By making adjustments and additions in virtually all the right places, the Catacombs has effectively made Dark Age of Camelot a better game. That is the core function of an expansion pack, and Catacombs does that better than almost any expansion pack out there. It is the very model of what an expansion should be.