Back in 1996 Treasure bequeathed unto the Saturn a very distinct game called Guardian Heroes that took previous flirtations by the beat-em-up genre with RPGs to a new level. Now that Guardian Heroes is on Xbox Live Arcade, more people can compare and contrast the title with Code of Princess to see how obvious the resemblance to the earlier game is. Agatsuma Entertainment may not command instant recognition among gamers like some developers, but plenty of ex-Treasure employees were responsible for Code of Princess‘s creation, and the result is something that will appeal to action-oriented players far more than others. It doesn’t hurt that the game is quite entertaining, but those without good twitch reflexes will likely not have as much fun.

The goal of almost every level is to kill everything in one’s path, but what sounds like any other beat-em-up becomes unique when one starts learning its specific mechanics. Code of Princess shares with Guardian Heroes three horizontal planes that the player can switch between at any time. Physical attacks can only strike home on the same plane, making a player’s maneuvering integral to progress. Switching between planes is accomplished by pressing up or down while blocking, and can be done at any time except when an enemy is making block perform its usual function. Pressing up when not blocking will jump, which is akin to 2D fighting games to the point of distinct moves being usable from the air. New to Code of Princess is a weak attack used with the Y button that locks onto a specific enemy, whereupon damage dealt will be double along with spells automatically homing on the target. Damage can be increased also if the player hits X to rapidly deplete all MP in exchange for doubled attack power. Even a MP bar in the thousands will be sapped to nothing in a very short time, so relying on this method is unwise. Code of Princess also uses status ailments to further distinguish itself from other beat-em-ups, though quick reaction times and fighting game-style motions are nevertheless required.

Completing each stage yields experience for a character, and the player can distribute all the points acquired at each level-up with complete freedom. It is possible to make characters nearly unstoppable with enough levels, but their inherent abilities will always be unique. A couple use MP with almost every attack they have, making the burst mechanic more of a gamble than with characters who have plenty of purely physical strikes. Pulling off the moves of characters demands the ability to make quarter-circle and double-tap motions in the vein of fighting games, and enemy AI is good enough that mindless button-mashing will not work for long. Thus increasing character statistics, while helpful, cannot win the day singlehandedly. 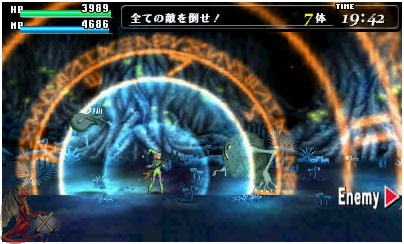 For those about to rock: we salute you!

The equipment acquired as spoils of battle, and from a continually-accessible shop, is much more of a burden, due to the sheer quantity presented. There are five categories of equipment, and dozens of options for each will be found. Often different pieces of equipment have the same name but different statistic adjustments, and sifting through the menus to look at every choice quickly becomes burdensome.

Four characters are available for the central storyline, with many more present in the multitude of plotless content elsewhere in the game. Each one has a distinct feel and move set, making it easy to find someone fitting each player’s preference. It also changes the game considerably to try taking on identical challenges with characters that do not control in the same fashion. Code of Princess is long for a beat-em-up but short by most other standards, making the wide gamut of available characters an effective way of keeping the proceedings fresh for much longer than the three or four hours required to finish with one person.

The story that supposedly propels events forward is not a paragon of fascination, though the ability to hold the R button down to fast-forward cutscenes helps restrict its distraction. In essence, Princess Solange is compelled to flee her kingdom by the forces of evil, and she meets plenty of friends in her quest to return home and have it out with the head nasties. Atlus slips a lot of amusing lines into the localization, but the tale itself saves anything even half-interesting until the conclusion, and spends quadruple the time necessary getting there.

Like Guardian Heroes, Code of Princess automatically zooms in on the player when not much else is in the neighborhood. It zooms out when enemies are crowding the screen in order to provide a better view, but often the action is so frenetic that losing track of the protagonist for a second is easy to do, especially when explosives are further obscuring the field. There is no real solution to this, and at least the crippling slowdown that can plague titles with so many sprites in motion is absent here. It nevertheless makes the otherwise attractive sprite visuals hard to see at times. 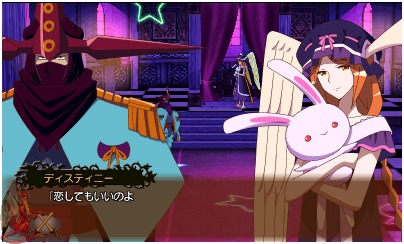 Your majesty, why exactly must I wear headgear that cripples all of my senses again?

In keeping with the humorous angle Atlus’s localization is trying for, the voice acting is often purposefully overblown. The result is rather amusing, and the actors have done a fine job of overacting without becoming annoying. The one slightly sour note springs from how often character battle sayings are uttered, since the same one will often be heard in rapid succession. The music is up-tempo for the most part and complements the chaotic visuals well, and the pieces composed for story sequences are also high quality.

Code of Princess doesn’t rely just on the story mode, or even the extra battles that supplement it without having any actual plot material. Beat-em-up titles almost always have a multiplayer capability, and this one allows it via the internet instead of the cumbersome link cables past Nintendo handhelds have relied upon. All of this is a means of extending the game beyond simply completing its story, and does the job superbly.

It’s a pleasant change of pace for me to tackle a game all about beating the crap out of everything in my path, with no other concerns to dilute the ferocity of pummeling my enemies into submission. Code of Princess provides an excellent means of satisfying the reptile-brain impulses within me, and like many other games in this genre it will be there whenever I need a sudden adrenaline boost. That makes it a difficult game to recommend for anyone without a reptilian brain that sometimes demands relief, but it satisfies the urge to concuss everything in sight splendidly.