What RPGamer worth his salt hasn’t at least had a passing dream about creating his own RPG? I would imagine that some of us have even gone as far as to delve into RPG Maker and try our hand at creation, but how many people can say they actually completed something? And even more so, who could say that their creation was not only playable, but fun? My guess would be very few of us. However unlikely turning our dreams into reality might seem, Zeboyd Entertainment has shown us all that it’s possible. Breath of Death VII: The Beginning is the third game from Xbox Live Indie Game developer Robert Boyd and his first RPG. It is a parody RPG in a classic 8-bit style featuring lots of self-referential humor and references to other RPGs. Though the low key graphical presentation might scare some away, for a $1 (80MSP) how can you go wrong?

Having tried and found quite a few indie RPGs lacking in one area or another, when jumping into Breath of Death I can’t deny that I was expecting the worst. So many of these RPGs are really too ambitious, biting off more than they can chew by trying to form a modern-feeling RPG around the limited confines of having next to no budget and a minimalistic development platform. Even some longer running indie RPG series didn’t start off very well, only finding their place a few sequels in. Breath of Death VII hit upon the right balance on the first try. It’s a wonderful mix of fast-paced combat, interesting character customization, and charming dialogue and characters. The game is easy to jump right into, and though it is fairly barebones, it embraces that weakness and does the best it can with it. 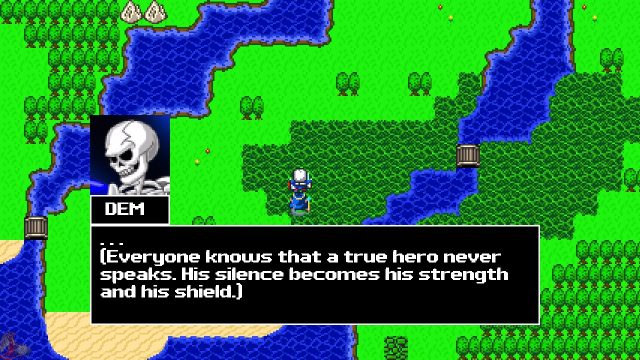 The main character is a skeleton warrior named Dem. Dem is a “silent” protagonist, but the game explains that this is due to him lacking a tongue. Thankfully, Sara the ghost can read his thoughts, so players are able to hear what Dem is thinking, but Sara often interprets his thoughts as what she wants him to say instead, causing Dem lots of frustration. There are a total of four playable characters starting with and the character interaction is quite humorous, especially dialogue found via the chat menu option. While the overall plot is fairly minimal, it’s worth it just for the script. It’s just a shame there wasn’t more, because this is easily one of the highlights of the game. Fans of Western and Japanese RPGs alike should enjoy all the subtle, and sometimes not so subtle, references.

Combat is very Dragon Quest-ish, featuring enemies on a black backdrop, characters hidden from view, and lots of text detailing combat. It’s a no frills system, but it works to create a speedy battle system. The key feature is the combo system in which performing certain attacks will build up the combo counter that can then be unleashed via combo break attacks that deal greater damage. Dem and his crew each have their own unique combat styles and customization options. There are also unity attacks where two or more members team up to create a more powerful skill. When leveling up, the party progressing party member is given two options which can greatly modify how the character performs. Sometimes it’s just a matter of picking between a boost to magic and a boost to strength, but there are also different options available for certain spells. One spell option might target a single enemy for a high level of damage while the other will hit all enemies for a lesser amount. This character development system is very simple, yet effective. It helps the battle system maintain the easy to get into feel, but takes things deeper than one might expect from such a simple looking setup. 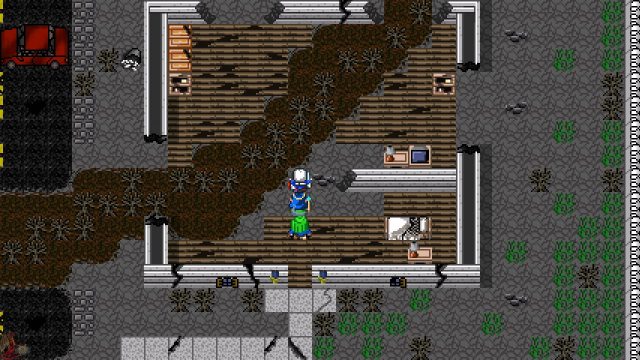 While the visuals of Breath of Death might be a tad too retro for some, the soundtrack is very catchy and enjoyable to listen to, almost surprisingly so. The overall presentation is fairly limited visually, but the sprite artwork and music help to alleviate some of those issues. Another nice addition to the game is the fight option that will spawn a battle on the spot. This is helpful because the game limits the number of forced random encounters in each area. This means instead of trying to survive through a dungeon by sparingly using resources, players can park near a save point and fight all of the required battles in a safe zone. Since HP is restored after battle and MP is restored upon touching a save point, this helps to mitigate any frustrations of random battles. Even without abusing this feature, the random battle ratio is fairly well balanced and with each dungeon having a cap on encounters, players should never feel too drained while exploring.

While it’s hard to complain too much about a game that’s only $1, there are a few points to nitpick. Having a quick save option would have helped this fast-paced game be even quicker to pick up and play in short bursts. Thankfully, save points are available in all the right places and aren’t too far apart. The equipment interface is a little limited. Players cannot sell back equipment or purchase new items such as potions, but since the game is fairly brief at just about six to eight hours, this doesn’t ever become much of an issue. Another nice feature is that equipment found in chest will be replaced by gold if that item is in the player’s inventory cutting down on item duplication, so that helps to counteract that issue. Most complaints about the game are fairly shallow, but smaller improvements would go a long way. Adding more details to the save system, such as location and play time would be helpful as well.

While Breath of Death VII doesn’t really break much new ground, it does succeed in areas that so many other RPGs before it have failed in by going a slightly different path. It is a very straightforward experience, but offers a creative character development system, multiple difficulty settings, lots of humorous dialogue, and a quaint soundtrack. The combat system, overall plot, and visuals are all fairly limited, but don’t take away from the experience and therefore serve their purpose well enough. Normally, I try to avoid factoring the cost of a game into a review, but in this case it’s impossible not to. It’s hard to complain about something that’s fun to play and is really inexpensive. This is truly an experience that is greater than the sum of its parts. Taking that into consideration, I truly hope that Breath of Death VII: The Beginning lives up to its name and begins a series of entertaining, quirky (and inexpensive) RPGs.