A Good, if Rough, Start

There is a plethora of games on Xbox Live’s Indie Games service, although RPGs are an underrepresented genre. Trying to make a bite-sized RPG is, in its own right, a challenge, as RPGs are complex games and Indie Games developers have a limited amount of space to work with. The reality is, every new developer has something they want to encapsulate in their first project, and sometimes the product doesn’t turn out perfect. Aphelion: Episode One — Graves of Earth by newcomers Lunatic Studio, is a game that oozes with potential, but is, unfortunately, quite rough around the edges.

At the beginning of the game, players are introduced to Savion Mercante, a young cadet of the Ereit Peacekeeper group. The story begins when Savion is sent to investigate a colony that has been attacked by an alien race known as the Crimsons. Savion, who has a reputation for recklessness, makes is ordered during the mission to save a Crimson ambassador. While the assignment was a success, his life is turned upside down when he takes on the new task of exploring the galaxy to rescue and relocate a scientist named Delith, who has been taken by Crimson. While en route to save Delith, Savion’s ship is attacked, and his former commander, Ceda, sacrifices himself in order for the mission to continue.

Part of the problem with the story is how abrupt it is. Players don’t really get to know the cast of characters, even though their banter is quite enjoyable. Savion, Ashley, Rita and Drake for the most part feel like hollow shells whose purpose hasn’t yet been revealed. With the game being episodic, it makes sense that the game focuses on exposition as opposed to character development, but it can be rather confusing to see certain events appear out of left field and be completely unexplained. There is the potential for Aphelion to create a neat space-opera atmosphere, but much of the game is spent on set-up for the series, so it’s hard not to be disappointed by the story’s pacing. It also doesn’t help that the ending is also so sudden that it comes across as completely anticlimactic. 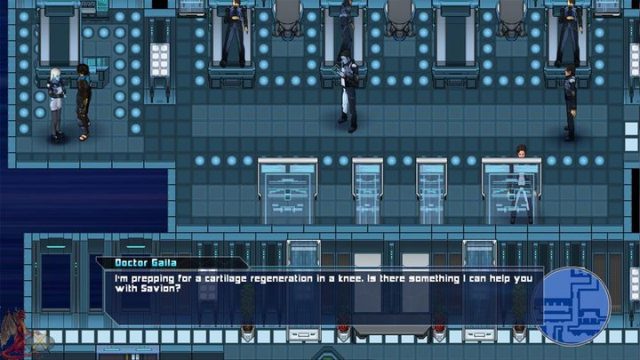 There are many things you can help me with… if you catch my drift.

Another issue, sadly, comes from an abundant amount of grammatical and spelling errors. While the game has been updated a few times since this review, there are still moments where awkward sentences appear, syntax errors occur, or sentences look as though they weren’t formatted for the text-box correctly. These issues really drag the story down in spots, and while they may not bother some, they are incredibly noticeable.

While the story is mostly exposition, the combat is one of Aphelion‘s more visible strengths. The game uses a traditional turn-based combat system, but adds some interesting features that some will find very enjoyable. Vindication attacks, easily the highlight of the battle system, are performed when the Break gauge has been charged to its maximum. This gauge is filled when characters perform attacks, or if they are hit by the enemy. Once the gauge is completed, all three characters in the party can unleash a devastating attack that, in most cases, will destroy enemies instantly. Characters also come equipped with a shield bar and will start to take health damage if it’s depleted, so players must be careful to keep the shields up in order to avoid quick character deaths. Beyond this, however, the combat is mostly a simple turn-based affair.

Players can have up to three characters join in combat, each with their own set of skills based on how they are customized. In the menu, players can modify their characters by using the ability chart. When a character levels up, they are awarded an ability point which can be spent to learn new skills, allowing characters to be tailored to however the player desires. There are tons of options, meaning characters might not have the same skills upon another playthrough. This is easily one of the strongest aspects of the game, and players will find themselves wanting to acquire each of the abilities just to see what they are capable of. The game also provides a simple-to-use crafting system, where new weapons, armor, and accessories can be made, and while this isn’t too unique, it’s another nice feature to tinker with. 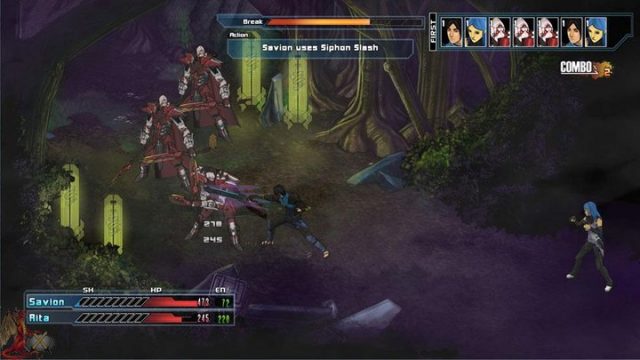 However, while the combat system and customization options are good, one major flaw comes from Aphelion‘s difficultly, which is horribly unbalanced. The game doesn’t know what kind of a challenge it wants to provide. The first boss of the game is surprisingly challenging, so much so that he has the ability to knock characters out in one hit, providing an immediate game over. Meanwhile the second boss in the game is easy enough to kill in less than six turns. Another noteworthy example finds a boss capable of instantly killing a character, then gaining a second turn with which to immediately kill another character. The pacing during boss fights is horrendous, and often players will either have to grind a few extra levels, or waste plenty of items just to stay afloat. Thankfully, items are plentiful and can be found throughout the game or purchased at dirt-cheap prices. Still, this awkward flux of difficultly can really hamper one’s enjoyment of the game.

Visually, the game is quite good looking, and is easily the highest quality RPG on the Xbox Live Indie Games to date. The environments look full, lush and colourful. Aphelion‘s character artwork is quite nice, and is a welcome feature on the game’s loading screens. However, there are a few complaints regarding the visuals, such as overuse of the colour blue, which can be distracting and is particularly hard on the eyes in the Odyssey Tower. The environments also feel a bit too cluttered in spots, as players will be running into a lot of random objects along the way. Besides the visual issues, the animations outside of combat come across as stiff. Savion’s run in particular is very awkward and disjointed. The battle animations and the simulation outside of it are awkward, and the characters look as though they are struggling to perform their actions, rather than their actions having any sense of fluidity. The soundtrack of the game is also quite fine, as there are pieces to hum along with, although there are a few moments in the game where sound effects are missing, which makes for some awkward event moments.

Aphelion: Episode One clocks in between five and ten hours depending on how much of the game’s content is explored. Before the endgame, there’s a battle arena that can be visited, and a New Game+ feature with additional bonuses once the game is completed.

There are a number of strong elements in Aphelion: Episode One — Graves of Earth, but it is a first game and it shows. There’s so much potential, but the game’s flaws make it a tough recommendation, although the developers are fixing some of the issues in new patches. Still, it’s clear that Lunatic Studios has a solid foundation with Aphelion, all they need to do is strip it down and pad out all the rough spots, particularly the pacing, which is the game’s biggest drawback. I do look forward to seeing what types of improvements will be made upon the release of the next episode, as this series has the potential to blossom into something great.