A Bunch of Lonesome Heroes

Ah, Aphelion, the little Indie RPG with so much potential that disappointed me in so many ways last year. I admit to being critical on the first game, because I saw so many great ideas, yet the overall product was disjointed, buggy, and lacking polish. Obviously, some slight apologies are in order, as Aphelion Episode 2 — Wings of Omega should be commended making a lot of improvements over the last game. That being said, it’s still not without some flaws worth mentioning.

Wings of Omega‘s story begins immediately from where Aphelion Episode 1 — Graves of Earth trailed off. Savion and his companions are on the run from the Earth government who believes they blew up a secret facility. Delith, whom Savion saved in the first game, has returned as a party member searching for his missing daughter whom he believes has been kidnapped. Savion’s quest to investigate the Crimson while attempting to keep his team together provides a lot more plot depth when compared to Graves of Earth, but unfortunately, the writing is convoluted in spots. It is imperative to play the first game to understand what’s going on in Wings of Omega, and even though there is a recap at the beginning, it may be confusing for newcomers who are jumping in with the second installment.

The game finally moves out of its exposition phase, and allows players to get to know the characters a touch better. However, the dialogue feels a bit rushed and disjointed, as some plot points feel anti-climatic and wishy-washy. While the plot is convoluted, lacking any sort of reason to care about the characters and their struggles, the writing quality is much better than the previous game, as spelling, grammar and syntax errors are fairly minimal. The writing and interaction with the characters is still quite good, but there’s so much in the plot that doesn’t come together, as certain characters actions are left unresolved. 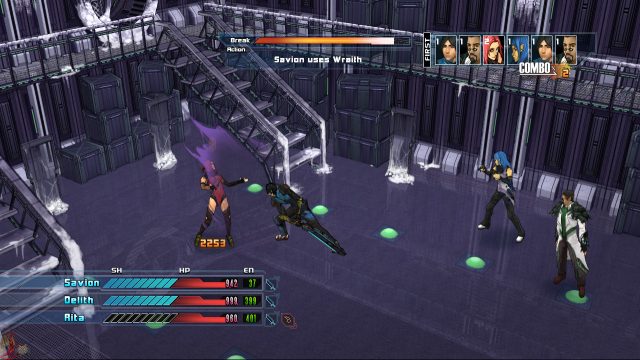 Despite this one major issue, Aphelion‘s interaction is mostly solid. The ability chart from the first game has been completely redesigned, and is much easier to use, allowing players to customize their party members as they so choose. Crafting has also made a return and is easier than ever to perform, providing each party member has the ability unlocked to create new weapons and accessories. Most of the best weapons and armor in the game must be crafted, though it’s possible to beat the game without having crafted even one item. Leveling has become a far more streamlined experience, making it a breeze to gain new skills without having abilities overlap within the ability chart. Also, unlike the previous game, Lunatic Studios has included a fast track teleportation system which will allow players to return to previous areas. This is especially useful when completing some of the game’s various sidequests.

Aphelion 2‘s combat has also become a much more streamlined experience, as animations look less awkward and flow much more naturally. Combat is turn-based, including the return of the Vindication attacks, which can only be performed when the Break gauge has been charged to its maximum to unleash devastating amounts of damage. One fantastic new combat feature is the introduction of Marduk, a high-powered vehicle that can destroy many enemies within its path. Being able to battle as a tank is very enjoyable, and reminiscent of the vehicle combat in Phantasy Star IV. The Marduk is easy to navigate, controls very smoothly, and is a nice addition to the combat experience.

The two main downfalls of the combat system are the lack of enemy variety and the high random encounter rate. In fact, there’s little to no enemy variety while traversing through the different areas. Besides seeing the same enemy faces, random encounters happen far more frequently in Wings of Omega, making it an annoying experience to explore each of the new areas in depth. While Wings of Omega introduced status effects, when hit with one, there’s a good chance players will die within the second or third turn if the effect is not removed. Status effects are far more overpowered in this game than even enemy attacks, resulting in many cheap deaths. 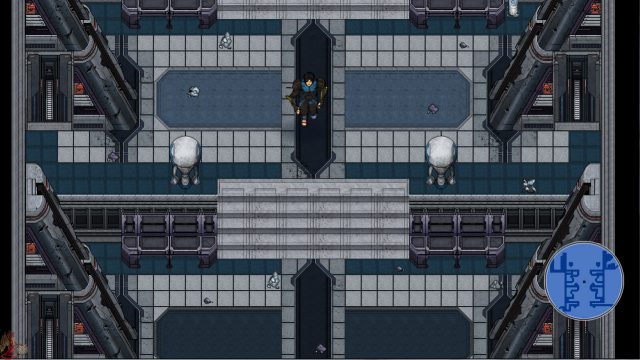 Thankfully, one thing that has been rebalanced is the game’s overall difficulty. One of the biggest complaints the game received was that the overall difficulty was sporadic, and the pacing of battles unnerving. This is one of the main items that has been tweaked and for the better, as Wings of Omega‘s flow and pacing is vastly improved upon. The game roughly takes anywhere between five to ten hours to complete, and includes more bonus content within the game’s New Game+.

Visually, Wings of Omega continues the trend of high quality graphics on the Xbox Live Indie Games Marketplace. They are crisp, lush and are far smoother than the previous game. However, some areas are slightly more cluttered than others, which can be detracting during exploration. Aphelion‘s art direction has always been one of the game’s highlights, and Wings of Omega continues to shine with more beautiful artwork and new character portraits. In terms of sound, Wings of Omega‘s score is recycled almost completely from the first game, with only a small handful of new tracks to speak of. The music itself fits the game’s atmosphere, though on a few occasions the sound did cut out in spots, bringing down the quality. Still, the songs are catchy and easy to hum along with, though the battle theme gets incredibly stale considering the high random encounter rate.

Aphelion: Episode Two — Wings of Omega is definitely a much more improved experience over its predecessor. Despite its convoluted story and lack of enemy variety, the amount of polish compared to the previous game deserves to be recognized. Sometimes you have to have a good, if rough, start to create a solid foundation for a solid sequel. Where some sequels fail, Wings of Omega improves on nearly every negative aspect implemented in Graves of Earth and offers a more refined and streamlined experience. If Lunatic Studios could just get a better grasp on its storytelling, it might have a homerun in the near future.