Aion: The Tower of Eternity Review

Aion created Atreia, the world in which both Asmodians and Elyos live. During the Cataclysm, the Tower of Eternity was shattered into two halves. Lying between these two fundamentally opposed halves is the Abyss. The Balaur were involved in the destruction of the Tower of Eternity and banished to the Abyss, where they have recently managed to escape from their prison. Wielding great power, this race wishes only death upon other inhabitants of the world. As these factions continually battle against each other, will they come together in the Abyss against the Balaur?

In NCSoft’s new MMORPG Aion, the player chooses to side with the sun-bathed Elyos or the Asmodians who were plunged into darkness while also choosing between Priest, Mage, Scout, or Warrior as a class. At the beginning of the game, the player’s character suffers from memory loss. Trying to collect pieces of this lost past occurs throughout the game. Beginning at level nine, a set of campaigns to ascend as a Daeva takes place, and a class specialty must be chosen. Priests have a choice between the healing class Cleric or the buff-centered Chanters. Mages pick between having a pet as a Spiritmaster, or doing more damage as a Sorcerer. The Scout may want to wield a bow as a Ranger, or do close-range damage as a dual-wielding Assassin. Warriors pick between a Templar Tank or a damage per second (DPS) Gladiator. Some pieces of the lost memory are recovered at level twenty, and more are recovered at level thirty, when an important decision must be made.

Combat combines melee attacks with spells in certain jobs, adding excitement. An example of this is the Cleric being unable to cast a certain spell unless a mob had just been struck physically. There are even longer chains, with up to three or four spells being available to cause even more damage after the player successfully hits with the first salvo of spells. However, some of these longer chain spells are governed by chance and don’t always go off. When a third chain spell does go off, massive damage will be dealt, and gaining levels only increases it. In most cases, that amount of damage will knock the enemy down to 50% health or even kill it if it is a lower level. While lower spells do nowhere near that amount of damage, they are very beneficial because Cleric DPS is very low. The damage put out from spells alone lets them easily kill enemies of equal level, and enemies up to two to three levels above their own with a bit more difficulty. In group play, the Cleric’s duties revert to pure healing which means usually casting all the time. The good thing is that the healing class can be played solo without needing someone to help kill things. 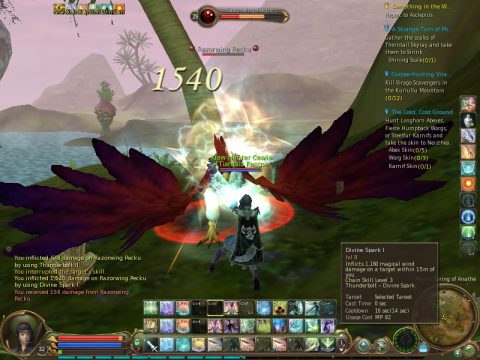 Most leveling is done through questing or campaigning. Gathering plants and fish, crafting, or performing work orders will also net experience. Campaign quests are for the main storyline and are marked with gold, while other quests are random little stories or orders to kill a certain number of monsters and are marked with blue. Surprisingly, the quests to kill monsters actually have little stories explaining why mass monster massacres need to happen. Other quests are purely running around to different NPCs. Some of them get quite amusing, with the character’s personality allowed to come through in the responses. Particularly when running around looking for an NPC’s money and constantly being shuffled off to someone else. The character gets quite distraught as this goes on, producing plenty of laugh-inducing responses. Campaigns are more involved and generally take longer to do, but have better and higher rewards than quests.

Through rifts, Asmodians can come into Elysea and the Elyos can come into Asmodae for quests or to simply PvP the opposing faction in areas level twenty and above. The rifts will open in undisclosed locations, for a certain set of levels and only for a set amount of uses. A rift can remain open for hours, or for only a few minutes depending upon how many people use it. Normally the player will post the location of a Rift in Region Chat after discovering one, for the benefit of anyone interested. This could be an incoming or outgoing rift. Once someone finds an incoming rift, it tends to be camped by a few members who wait for the opposing faction to jump into a nest of enemies unexpectedly. Even though the level of the opposing faction cannot be seen, there are other signs of their level such as rank and armor. A lower rank tends to correspond to a higher level. The good thing is experience won’t be lost when being killed by the opposing faction. Clerics tend to be targeted for easy kills, and die quickly in most PvP. In an unrepresentative but nonetheless fascinating case study, multiple efforts by a Cleric to survive the opposing faction’s attacks succeeded just once by killing the enemy first, though this inauspicious result may change the higher level the Cleric is. 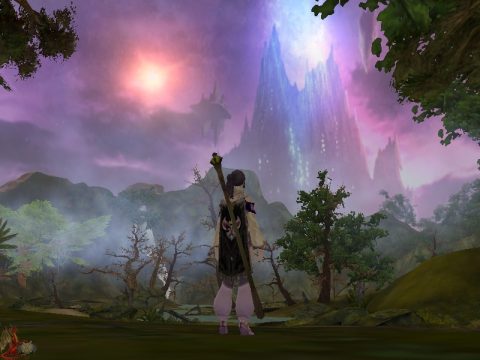 The Elysea half of the Tower of Eternity appears in the background.

The game is visually amazing. The artistry for the sky is terrific, with detail unmatched in other MMOs. The Tower of Eternity is visible from pretty much anywhere, and it glows brightly after nightfall in a beautiful way. Characters actually put up leaf umbrellas when it rains, in a nifty example of detail. It takes an optimum graphics card to do this game justice, but even without a premium one its water, trees, and moss look good. The game remains visually stunning even with everything set to ‘low.’ The only drawback is that the view doesn’t go very far into the distance, but this hasn’t hindered gameplay because a mini-map is helpfully placed in the corner for easy reference. Aurally, the sound effects are incredibly good and the music changes based on the real-world seasons, breaking up monotony before it has a chance to appear.

Aion isn’t really easy or difficult; some of the quests are hard and some are very easy, but with the right group setup anything can be completed. Quests and campaigns all tell what level they are best completed at, and can be acquired several levels above the player’s. One can either try to complete a quest or wait those extra levels for an easier run, dependent upon the job. It can take over eighty hours to get maximum level in this game, however, those more experienced in MMOs might complete the game quicker. 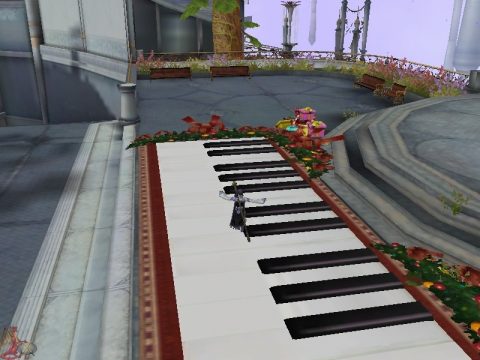 Look! A giant keyboard seen in the movie “Big” made an appearance in Sanctum over the holidays.

Menus are slightly clunky and and may be hard to get used to. While most menus are easy to find (H for Help, P for Profile, M for Map) others are not and may result in the player hitting random keys until the right menu pops up. The emotes are great and silly, and players will really enjoy playing around with them.

The one thing in the game that is continually annoying proves to be the camera. It could be called the ‘Unsmart Camera’ as a nickname because it seems to follow the terrain, and not the player or even the enemy being attacked. Everything is fine when the enemy is directly in front of the player, but upon trying to pull an enemy to the player’s side, suddenly the camera shows the sides of both combatants. This principle is also applied to enemies that might aggro the player from behind, and one could end up seeing the front of a character being attacked by a mob that could be offscreen. While this can be overlooked as a minor inconvenience for PvE, it is much more aggravating in PvP. An example of this aggravation comes from the story of being attacked by an Asmodian from behind. Upon trying to counterattack, the camera did not turn around with the character, and the Asmodian ran away. Automatic casting of a spell started the player’s character running after the enemy to get into range without being able to see the path ahead. This forced the player to stop and manually turn the camera, by which time the enemy had disappeared from radar. If NCSoft was to change only one thing about Aion, that would be it.

Even though the Aion story is simplistic, it instills some loyalty to the player’s faction. The major quests give way to appealing cutscenes that also give clues about where the player has to go next. Some major campaigns even have cinematic cutscenes with a voice leading the way. Even lesser quests that don’t have any cutscenes tell a story, and there’s always a reason behind the actions one is asked to perform. The mid-air PvP and PvE is very original, but don’t get so distracted by the combat that the flight time meter is forgotten.

The game has a high degree of armor customization. The player could have a giant fish weapon, or even have a pair of devil horns and a bright red suit. Being able to fly and attack at the same time is unique and very entertaining in Aion. Those who do not like PvP should steer clear since a large part of the story is protecting your land from the opposing faction, but PvP lovers owe it to themselves to check this game out.

Tags: Aion: The Tower of EternityNCSoftPC