XSEED Games has revealed its physical edition offerings for upcoming farm and life sim, Story of Seasons: Pioneers of Olive Town. Alongside the standard edition of the game there will also be a premium edition that includes a pocket plushie of the game’s mascot, Buffy the buffalo, as well as a 13.5-inch by 24-inch cloth poster of the key visuals of the game. The premium edition is only for the North American release of the game.

Story of Seasons: Pioneers of Olive Town is the latest title in the Bokujo Monogatari/Story of Seasons farming/life simulation franchise. It will be released in Japan on February 25, 2021, North America on March 23, 2021, and Europe on March 26, 2021. 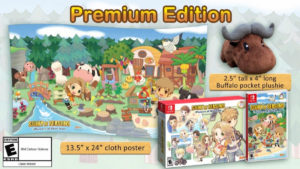 Geek of all trades, music lover, and craft beer connoisseur.