I am going to be candid for a moment: I waited two hours in line to play this game. No game is worth a two-hour wait.

And neither was Persona Q2: New Cinema Labyrinth. The wait was long, tiring, and you’re thinking: Sam, you could have left at any time! True, I could have. The problem was this was the most requested title that the RPGamer staff wanted to know about. Sadly, the fifteen minutes that I had with it shows that it is the same game we’ve all played before. That’s not a bad thing if you love Etrian Odyssey or the first Persona Q, it just doesn’t make for an interesting demo experience. 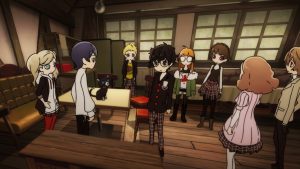 Persona Q2: New Cinema Labyrinth‘s TGS demo was a combat focused one. When I began the demo, it had me starting on the first dungeon with the Persona 5 crew. My party was Ren, Ann, Yusuke, Morgana, and a new heroine, whose name I didn’t get because I couldn’t read the kanji (my apologies). As I roamed the cinema-themed dungeon, I was was engaging in different battles. Combat is still turn-based, and in true Persona fashion, when all enemies are knocked down, an All-Out-Attack can be performed. There is also a bunch of new unison abilities when pairing different characters together, though since I was at the beginning of the game, that option was not available. I as wandered about and made it to the second floor of the dungeon, I totally ran into an FOE, and before my butt was handed to me, the timer went off and the demo was over. 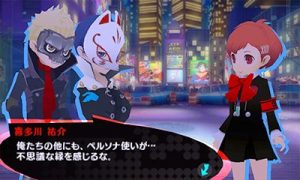 I love the movie aesthetic that is present in the game. Graphically, the game has a lot of charming elements such as curtains, film reels, and popcorn throughout when moving between areas of the game. Other things I learned about the game was that there will be twenty-eight characters in total to control, as well as mix and match for unison attacks. One that the trailer showed off at TGS involved Morgana, Koromaru, and Teddie all being in an out of control catbus. So cute! While no North American or European announcement has been made for Persona Q2: New Cinema Labyrinth, the game is set to release in Japan on November 29, 2018, for the Nintendo 3DS.