Taking on Shin Megami Tensei V for this review was an ambitious undertaking. Without the Safety difficulty DLC (a day-one free update) and experience with other entries in the series, I was forced to learn the game’s mechanics and accept defeat multiple times, even on Casual difficulty. It’s true that Shin Megami Tensei V got frustrating many times, especially with the amount of grinding needed to progress in the story, but it was one of the most memorable gaming experiences I’ve had in years.

Shin Megami Tensei V’s story begins with a voiceless main protagonist heading to school just like any ordinary day. He meets up with his friends, but things quickly become otherworldly when they are hurled into a post-apocalyptic Tokyo overrun by demons. Humanity was blind to the bigger war raging between angels and demons, but they must involve now themselves in the conflict. The outcome decides their future, and at the center of this revolution is the main character, who in order to survive fuses with a being called Aogami to become the Nahobino, a powerful creature neither human nor demon. 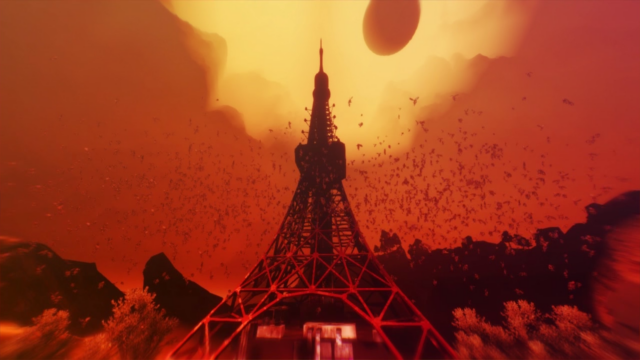 A majority of the game takes place around four different open areas in the Netherworld — an alternate reality that mimics a post-apocalyptic Tokyo. Various angels and demons hover around as a biblical war wages on. The world looks dusty, lifeless, and dry. The sun hangs in the distance, and some of the atmosphere is drenched in blood-red hues. While the setting is haunting, the desert-style environments become a bit stagnant when the player is forced to spend a lot of time in them fighting and collecting demons, doing sidequests, and leveling up. Luckily, there are some more surreal and modern-looking environments to help break up the monotony. Shin Megami Tensei V also diverts away from the dungeon-crawling elements of its previous entries by giving exploration some much needed verticality. Jumping around the cityscapes and zooming between enemies is adrenaline-inducing.

Mixing and matching demons is the bread and butter of the Shin Megami Tensei V experience. The only mainstay in the party is the protagonist as the Nahobino. The other three slots are filled by demons that players will be switching in and out. Since the game constantly changes the weaknesses, strengths, and unique abilities of foes, players have to switch their party members to meet these challenges. The great news is that fusing demons is fun and Shin Megami Tensei V gives players multiple ways to approach this mechanic. Players can talk with demons on the field and attempt to gain their loyalty, and then fuse them whenever they see fit. This is achieved using the negotiation system. Although a bit random, it isn’t too hard to figure out how to appease demons in order to get them to join the Nahobino’s party. Saving often is a good idea, however, because things can go very wrong. Demons will demand health, mana, and currency, but even after receiving these items, they can flee from battle. Others won’t like certain responses and retaliate by taking the next turn and damaging the party. If players don’t want to sideline a favorite demon, they can use stat-boosting items called Grimoires that can be obtained from regular encounters. 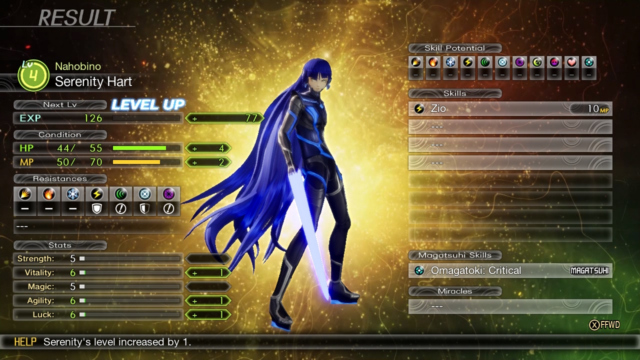 Battle customization is an essential part of the SMTV experience.

The Essence System is where customizing a party is the most intriguing. It allows players to teach the skills of a demon to another one in the current party, and change the Nahobino’s skills and attributes. It’s even possible to claim the demon’s elemental weaknesses and resistances. Those who embrace the system will find themselves with quite a powerful and robust collection of demons, though using it to the fullest might be difficult for newcomers as the game only vaguely describes how it works. The best way to figure it out is through trial and error.

SMT’s well-known turn-based system called the Press Turn System returns, where exploiting enemy weaknesses or getting a critical hit gives players a bonus turn. Conversely, using skills that enemies are immune to or missing an attack takes away a turn. Even on Casual, walking into a fight without the proper preparations will see the party struggling or Nahobino dying. Demons can be swapped into combat using one turn, but if the main protagonist dies, it’s game over. This combat system is both rewarding and frustrating, but never feels unfair. Most failed encounters are beaten with a little more knowledge and preparation.

Patience and cautious planning are essential to Shin Megami Tensei V. Even the Casual difficulty, while definitely more lenient, punishes players who try to rush through the story, thought there is now a free Safety difficulty DLC. This isn’t too shocking given the pedigree of the Shin Megami Tensei series. Trying to simply grind levels and power through encounters isn’t enough and sets players up for tedium. Unless they are fully prepared, and are ideally armed with knowledge of enemies’ weaknesses, players shouldn’t be surprised to meet with the game over screen on their first encounters with powerful foes. 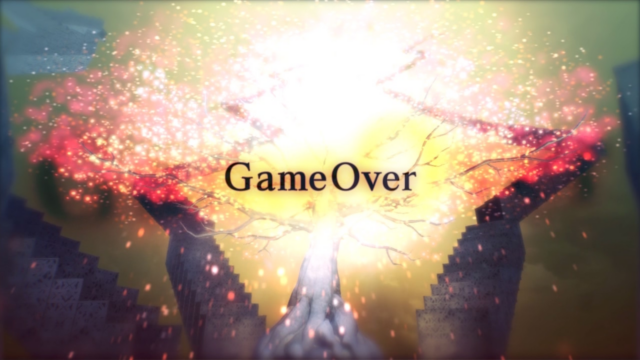 Players will get used to seeing this screen. At least it’s beautiful.

This doesn’t mean that grinding isn’t part of the achievement formula. Enemies jump in level quickly, especially after a few minute-long cutscenes. This is why it’s important to balance out fighting enemies with quests and exploration. Players will also want to take on optional enemies called Abscesses. Not only do they prove to be rewarding and challenging fights, but they also act as difficulty benchmarks for their respective areas.

A small percentage of gameplay time is spent in the non-apocalyptic parallel of Tokyo. These more story-focused moments act as welcome breaks from the grinding, even if they are surprisingly short. This is where the Nahobino interacts with other characters and dialogue-heavy exposition is delivered to help give purpose to the next challenge. Additionally, this parallel world is where the more traditional dungeon-crawling elements come in. They are found at the end of each chapter and are a welcome departure from the open-world formula. Beyond a few puzzles and backtracking in hallway-like structures, progression in these areas isn’t that dull. 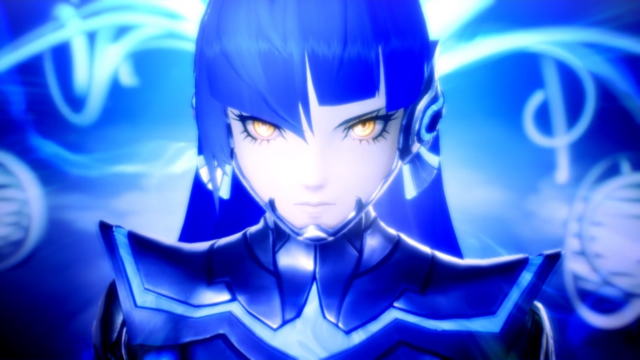 Nahobino is a breathtaking, androgynous entity.

Shin Megami Tensei V’s story invites divided opinions, and it’s easy to see how different people can call it dense or shallow. The opening hours only include a breadcrumb trail of story moments, but each moment is loaded with a lot of lore. It’s reminiscent of an epic poem, like Milton’s Paradise Lost. Players who aren’t paying attention will miss out on the finer details. The story is told more through environmental elements and exposition than character development. Speaking of characters, the supporting cast does lack the attention that players who are familiar with the Persona series will expect. Their purpose isn’t to propel the narrative forward, as much as they are meant to represent the game’s three underlying philosophical principles: chaos, order, and neutrality. This doesn’t mean that they’re completely bland, but it does mean that players may have stilted feelings on events that affect them.

The overarching story of Shin Megami Tensei V is a fierce retelling of the traditional Heaven versus Hell and the human condition tropes. Continuing the series staple, the game eventually branches into one of three routes based on the player’s choices. One of the fears that came with grinding and being served only morsels of the greater story in the first twenty or so hours was that the narrative would fall flat when the credits rolled. This isn’t the case, as the story builds momentum and dives into some satisfying metaphysical concepts that appeases story-driven players who look for a “why” when completing a dense game. 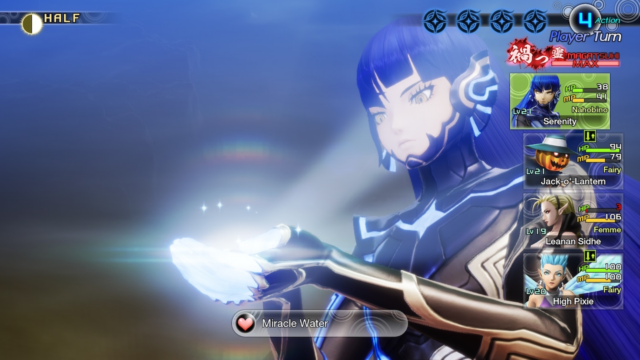 The art direction of SMTV is gorgeous, and is best expressed in the main protagonist, demons, and unique combat abilities.

Artistically, Shin Megami Tensei V is beautiful and stylish. The Nahobino’s transformation is memorable, with his overall androgynous appearance being a welcome change from other SMT protagonists. Seeing his glorious mane of ethereal hair swish back and forth as he runs and jumps across the abyss never gets old. The demons also have great and varying designs. Some players may even want to mix and match them to bring a specific aesthetic to their party. Sound effects, such as attacks and screeches, feel satisfying as well, and Atlus used the Unreal Engine 4 to bring their first high-definition SMT entry to life. The graphics push the Nintendo Switch to its limits, showing occasional framerate dips and texture pop-in. It especially noticeable when undocked, but doesn’t detract much from the overall experience. Additionally, composers Ryota Kozuka and Toshiki Konishi bring life to the desolate world of Shin Megami Tensei V with pieces that have a strong grunge element to them. “Battle Da’at” features shredding guitar hooks and garbled vocals while selections like “World of Shadows” emphasize the more melancholic moments in the story.

Presenting players with a beefy, challenging, and ultimately rewarding experience, Shin Megami Tensei V is a game that pulls newcomers into a polarizing experience. It is common to feel motivated to play the game for multiple hours, only to have that motivation knocked out once the current party lineup can’t stand against the next boss fight. However, it is also common to return to the game after a break and feel a strong sense of achievement after beating a particularly difficult foe. It’s an excellent entry point for those unfamiliar with SMT, should provide great joy for returning players, and should not be missed. 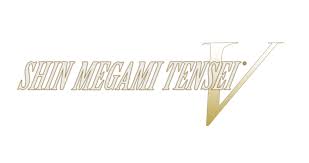