Is This Too Different for a Remake, or Do I Have Amnesia?

Etrian Odyssey was a charming gamble back in 2007. Somehow convincing us that hand-drawn maps, first-person dungeons, and characters with personalities as blank as their slates were great hallmarks of a bygone era that only a stylus and dual screens could bring back, Atlus blessed the world with an unusually old-school gem. It filled a void gamers didn’t realize existed, although it was quickly followed by a heap of new releases in the genre, and the void now more closely resembles a landfill. Nothing says market saturation like a back to basics remake of the game responsible for it all, and Etrian Odyssey Untold: The Millennium Girl is a smart, well-executed game that updates and overhauls too much to be a remake. Other than the setting, classes, and dungeon size, it does not have much in common with the original. That’s a good thing.

The most obvious change in The Millennium Girl is the addition of a preset party with names, classes, and personalities the player cannot control. With this restriction comes bonuses such as voice acting and a real story. The player assumes the role of a male highlander — a mercenary who fights for justice, love, and other nice things rarely associated with mercenaries — sent to Etria to discover the monstrous source of recent earthquakes. He soon runs into Frederica, a mysterious 1,000-year-old girl with amnesia, and bands up with her and three librarians who pack as many tropes as possible into a group of five and set out into the labyrinth under Etria. There isn’t much to the new plot itself, which happens in tandem with EO1‘s plot, but the character interactions are endearing and add to the game. Cutscenes are short, somewhat like Tales series skits but not as silly, and always welcome as brief, interesting breaks from the battles and exploring. The story ultimately takes a philosophical turn as multiple characters who have lived or followed set duties for many generations each come to terms with the purpose of their long existence, and ponder such things as death, sacrifice, the worth of a human life, and how to execute their final tasks, so there is a worthwhile story payoff by the end.

The basic mechanics of the game are the same as they were in the original. The dungeon is a massive, singular labyrinth without the smaller layouts or overworld exploration that Etrian Odyssey IV used to break up the endeavor. In addition to warp points every five floors and hidden shortcuts throughout the maze, The Millennium Girl adds a floor jump feature. Once an exit is found after the floor has been mostly explored, and it uses a generous definition of “mostly,” the party can warp back to that exit from any other unlocked floor. This means the party can always warp to the latest floor, and warping back and forth between previously completed floors can happen at any time outside of combat. This shaves off dozens of hours that would be wasted repeatedly walking back to the deepest point of the labyrinth and is a great new feature. 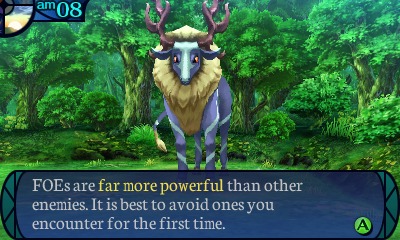 The maze itself, though, is entirely new in The Millennium Girl. While the strata’s settings and the most memorable and identifiable features from EO1‘s labyrinth have been kept, the layouts are all completely redesigned and they’re wonderfully interesting. Comparing the two games side by side shows how much thought and attention to detail went into the new layouts to keep them both familiar and new. Gushing over specific examples would be tough in a review, but suffice it to say that this is the most interesting to explore, intriguing maze in any EO game. It brings back the series’ emphasis on labyrinth exploration that the last EO or two drifted away from in attempts to be more palatable to newcomers.

Similarly, character classes and combat have returned to a simpler time in EO‘s history. Other than a boost ability to infrequently increase the power of a turn and having front and back rows for the party and enemies, the battle system is just Dragon Quest. For character classes, the five party members are predetermined and there is no dual-classing. To make sure the player can handle any situation, only three of them have standard, specialized classes from EO1. The other two are new classes to EO1. The highlander is a sturdy frontline fighter with an array of powerful attack skills. Frederica is a gunner capable of binding, elemental, and high damage attacks from the back row, effectively combining three of EO1‘s classes into one. The new classes are not overpowered by any means, and are an excellent workaround for how EO1 was designed for party experimentation and rotating in bench characters for special situations. A meal can be consumed before entering the dungeon, compensating for the HP and TP boosting and regenerating abilities that a troubadour would usually provide. For better or worse, this does mean there is not much room for customizing builds.

Customization comes in the form of grimoire stones, The Millennium Girl‘s only new addition other than floor jumping. On rare occasions a grimoire stone is generated after battle. A stone contains skills from a foe, skills from an ally, or a mixture of both. A grimoire stone also has a weapon type associated with it. Each party member can equip one stone at a time in town, thereby getting access to the skills on the stone plus the ability to equip the type of weapon associated with it. Multiple stones can be fused together through a nonrandom, straightforward process to create a single stone with only desirable abilities. The system is good for its flexibility and how little time and thought it takes to make new stones — once an ideal set of skills for customizing a party member is on a stone, it never needs to be checked or fused again until a better skill is dropped, which will be infrequent — but the interface is clumsy and the stones can slightly unbalance the game. It’s great getting access to a hexer’s debuffs or boosting the party’s gathering abilities without wasting skill points, but being able to do this on five individuals while granting all the squishy combatants access to shields and all the tough fighters access to ronin swords and guns is a little close to cheating. 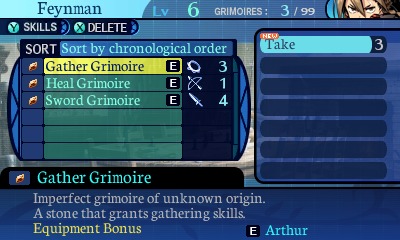 As simple as grimoire stones are, they are tough to explain concisely.

The overall presentation is like the rest of the game: polished and well thought out. The localization by Atlus USA is great. The protagonist is far from mute, and the player always picks his lines. Options usually play off party dynamics where he agrees with one person or disagrees with another, and the writing does an excellent job of at least providing the illusion that the player guides some of the conversations in the game. The writers know when to be silly and when to be serious, and although much of the game’s chatter really is mundane, it never feels that way. Visually, this is at the technical level EOIV and SMTIV should have been. Everything from the walls to the monsters is crisp and pretty, the backgrounds move and have depth, and if your eyes and brain can handle the 3D, it is worth keeping on. While the music is a matter of taste, it changes in each stratum and there’s an option to flip it between the orchestrated version and the original EO1 version at will. The orchestrated attempts at calming jazz can be too Yanni meets Kenny G for me, and I changed to the EO1 synth in those areas, but in others I loved the orchestrated music, so options are good.

The game’s biggest option, which cannot be changed at will, is the choice to play The Millennium Girl in Story Mode or Classic Mode. Only Story Mode has the previously mentioned party members, with all the customization restrictions, plot, and endearing conversations that come with it. Story Mode also has an extra dungeon and additional bosses. Classic Mode provides an EO experience at its quiet roots, complete with characters created by the player who only interact and have personalities in the land of imagination, but who also can be fully customized. After completing Story Mode, the Atlus-made party can be imported into a new Classic game. Otherwise the new highlander and gunner classes do not seem to be available in Classic. Grimoire stones, the labyrinth improvements, and everything else are, though.

While Etrian Odyssey Untold: The Millennium Girl might pose as an easier EO experience with less irksome customization and a significant plot, the gameplay still boils down to dungeon crawling, drawing a map, and frequently fighting enemies. Story Mode adds to these events, but it does not reduce them. Anyone bored by slow first-person dungeon crawlers will still find around eighty hours of that here. Simplicity and streamlining are concentrated on party creation and retreading completed floors, both of which are axed and don’t need to be missed; if you want to make a party, play in Classic Mode. The game still drops unbeatable FOEs on narrow paths where an inopportune encounter can lead to a fast death, bosses are unforgiving, standard enemies can kill quickly, losing the medic means a trip back to town, and other hardcore mechanics are still there. It’s not an easy game, but on the standard difficulty the player gets one mulligan per dungeon trip, after which it would be smart to use an escape item to avoid the title screen.

For me, this is an ideal remake. It keeps all the hardcore mechanics I love, gets rid of the ones I find tiresome, overhauls what needs to be improved, and leaves the right things alone. Any EO fan who isn’t burned out should enjoy this game, and even if you’re burned out it might be worth a shot thanks to the reduced rote activities.