I must admit I have a lack of experience with dungeon crawlers. I obsessively played Dungeon Master on the Super Nintendo, but was never able to get past the first screen. After that, I learned my lesson and realized that perhaps the dungeon crawling genre was not for me. Eyehook Games’ Epic Dungeon caused me to second-guess that assessment. So even though I was giving crawling a second chance, I did so with it kicking me in the shins and laughing at me to continue if I dare. And oh, I dared.

Thankfully, Epic Dungeon has zero similarities to Dungeon Master. The game is a simple roguelike with some unique changes that are atypical of the subgenre. For one thing, combat is not turn-based, but is performed in real time. Weapons also engage automatically against the enemy, while button presses are used to perform special skills related to the chosen class. At the start, players have the choice between four different heroes: Berserker, Shaman, Tinkerer, and Gambler. Each character starts with just a primary skill, but can other skills as the player progresses. For example a Berserker begins with Frenzy, a multi-hit attack, but could also put points into Poison, which is the Gambler’s primary skill. This level of customization is definitely helpful while traversing through this fifty-floor mammoth of a dungeon. Skill points can also increase a characters dex, defense, attack, and luck, which are all integral to survival. It is important to keep all attributes balanced, as having high luck grants better item drops, while having strong defense allows players to take less damage.

Combat is definitely a robust experience, as being able to customize one’s hero allows for multiple possibilities on how to build the hero. Taking on the frenzy skill while playing as a Tinkerer will give him higher attack power, even though he’s a fairly fragile hero to begin with. It’s completely up to the player as to how they wish to distribute their skill points, but that’s part of the challenge each time the game is fired up. And players will be firing the game up more than once because Epic Dungeon is far from easy. 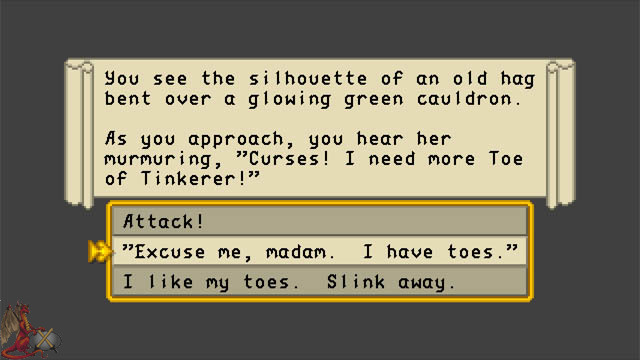 There is a downside to grinding in a roguelike, and it comes from grinding too much. While enemies do respawn, they sometimes have a tendency to respawn in clusters. This means that in some rooms, players will discover bunches of enemies, and no way to move past them without charging through and taking massive damage in the process. Since dungeons are also randomized, going down to a new floor also entails being ganged up on by groups of enemies, causing many close calls or permanent death. In most cases, enemy clusters are completely unavoidable, adding to the overall difficulty of maneuvering through each floor. Still, it’s a fair challenge. It’s just heartbreaking when a hero dies due to enemy overload.

Although there is no real plot to speak of, the dialogue through which Epic Dungeon allows the player to experience the story is outstanding. While traversing through the dungeon there are numerous questions marks that are scattered, each proposing a situation that can entail either a positive or negative outcome. For example, players could be roaming around the dungeon and spot an ogre barbershop quartet. The player can choose to attack them, join in, or just run away. Whatever option players choose has numerous implications, and what choices made will either work for or against the player. Whatever one chooses, players are always welcomed by hilariously random situations that are hysterical to read. 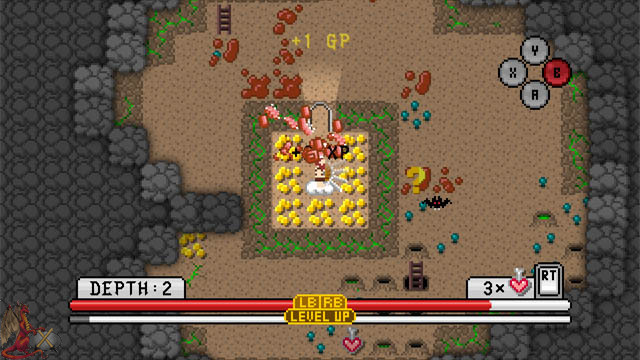 Sadly, two areas in which Epic Dungeon is lacking are the audio and visual departments. First, the game isn’t exactly a winner to look at in terms of graphics. Graphics take a minimalist approach, and the dungeon designs do not have a lot of variety to them, so what players traverse through comes across as very repetitive. In the audio department, the game consists of two tracks. Thankfully, the two pieces are great compositions, but there’s no variety and having to hear the same two tracks repeatedly can become unnerving.

Epic Dungeon is a game that is as long as the player chooses to make it. For some, a single playthrough could range between two to three hours, while for others it could be closer to five hours depending on the level of caution, grinding, and looting that is exercised. Part of the experience comes from the numerous times players will have to retry after they die, and seeing how far they can make it on their next run.

Epic Dungeon is a fast and furious experience, with hilarious and top-notch writing, and a challenge that is daunting, yet entertaining. I’m amazed I traversed safely through all fifty floors without having a heart attack in the process, though I can’t say I made it out completely unscathed. Epic Dungeon is a great challenge at only 80 Microsoft Points (or $1), and definitely has enough of a challenge to keep RPGamers playing even after the experience is over.