Dragon Quest IV: Chapters of the Chosen, the first of the Zenithia Trilogy to be re-released on the Nintendo DS, is the only game in the trilogy to have seen a North American release prior to this DS rollout. Chapters of the Chosen makes the transition to a portable in fine form, with new 3D environments and an additional bonus chapter at the end of the game. Though lacking in some areas, Dragon Quest IV is still an enjoyable experience.

As its title suggests, Dragon Quest IV is divided up into chapters. The main character begins the story via a prologue where he (or she) narrowly escapes a tragic death as his village is attacked, but is then not seen again for many hours. During that time, players meet other heroes who are destined to assist the young hero in saving the world. Each of the chapters are self-contained vignettes where the supporting cast is given screen time. These individual stories of the loyal knight, rebellious princess, sisters in search of revenge, and a merchant who dreams of owning his own shop are entertaining, offering a varying perspective of the larger world and story to come. When the cast finally comes together, the focus is more on the overall plot, which is not as fleshed out as the individual chapters. The main villain helps to give the player a reason to care about continuing the quest, though the spark the characters had in their individual chapters is missing. While the game does not offer the most original take on a fantasy story, the cast of heroes and villains still help to make it a charming experience. The one major downside is the lack of party chat, which was cut from the North American version. Had the game only offered it, Chapters of the Chosen would have been a much more solid experience, as the dialogue between characters would have helped bring life back into the story. 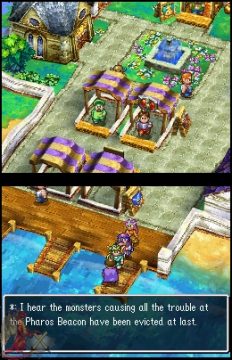 Gameplay in Dragon Quest IV is the same as long-time series fans have come to expect. The turn-based system is as straightforward and unassuming as ever, with each character offering a different set of talents. While in early chapters the party is fixed dependent upon what is taking place in the story, eventually the whole cast comes together. This allows players to craft a party of their own choosing. Whether melee-focused or magic-heavy, there is a good balance between each, so it’s not going to handicap the player regardless of the path. Each character has its own strengths and weaknesses, so gamers can easily defend their chosen party as the most optimal for success.

The chapter setup for Dragon Quest IV is one of the game’s biggest strengths. This gives some variety instead of repeating the same old formula throughout the entire game. Some chapters will have characters venturing around completing quests, with one simply about raising enough money to start a shop. While it does not go fully into simulation mode, the change in formula is welcome, as it displays the characters’ motivations and helps strengthen their reasons for coming together to save the world later on. The one issue it causes is that each new chapter can feel as if the game is beginning again, with new characters being introduced out of nowhere. While this frequent reset might frustrate some, it blends with the quick pacing of the chapters and helps the game not to grow stale over its twenty or so hours. The bonus chapter at the end of the game even adds a little extra without being just a boring bonus dungeon with no purpose. While most everything else about Dragon Quest IV is standard fare for the series, this change up along with the streamlined, tight narrative makes Chapters of the Chosen a perfect fit for the DS. 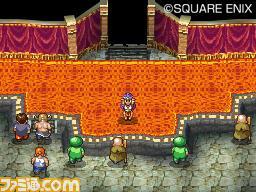 Any RPG with a sexy dancer in it is good in my book.

The 3D visuals are nice, but not revolutionary. It does not do justice to the unique and impressive character designs, as players are still limited to basic sprites and character portraits for most interactions. At times the 3D environments can frustratingly obscure the area making it difficult to see a needed item or door. The rest of the presentation is decent enough, but the music is very impressive. Even those who are not fans of Sugiyama’s work might find his tracks in Dragon Quest IV to be memorable. The unique pieces associated with each of the main characters are quite enjoyable, lingering even outside of the game.

For the start of the DS trilogy, Dragon Quest IV does a lot right. It gives an upgraded English experience over the original release, though it really needed party chat to offer the whole package. Other than that, Dragon Quest IV takes the standard DQ formula, adds a little variety in the layout, and then gets straight to business. Dividing the story into chapters helps the telling of the game’s concise story, which at just over twenty hours, does not wear out its welcome. The main characters and villains all have fairly plausible motivations, which also strengthen the game’s narrative, so despite the game’s failings, mostly a lack of party chat, it is a good game for newcomers to dive into the series. And while Dragon Quest V: Hand of the Heavenly Bride might make a better starting point, Chapters of the Chosen is a solid experience that is just missing a few key components that would only have made it better. Those who have a few other Dragon Quest games under their belts should appreciate the unique approach Dragon Quest IV takes and how tight the design is. Even if there are more complete Dragon Quest games out there, this is not one to underestimate.