It’s been quite a while since the last game in the Mana series reached these shores. In the latest in the series, Children of Mana, players chose one of four characters to investigate the recent chaotic mana surges that threaten the world. Like previous games in the series, it’s possible to team up with other players, but sadly this function is not available over wifi. However, unlike previous Mana titles, Children of Mana is heavily dungeon-based. Very little time is spent in town, which serves mostly as a base of operations where players are able to stock up on supplies and take on quests.

Dungeons consist of a number of zones that players must traverse in order to reach the boss or complete the quest. There are a number of traps scattered throughout dungeons, but unfortunately there aren’t any puzzles. In order to proceed, players need to fulfill an objective that ranges from searching through pots to defeating all enemies in order to receive a gleamdrop, which is essentially the key to the next floor. Players have a chance to save and change equipment every four floors, though they are able to use the magic rope to escape and return to town at any time should they need to. It should be noted that while story dungeons are generally carefully designed and enjoyable, quest dungeons primarily consist of generic cookie-cutter rooms that become quite monotonous rather quickly. It’s fairly common to end up going through the same room, with minor variations in items and enemies, several times in the same quest. Luckily, these quests are entirely optional, though some special sidequests have excellent rewards. 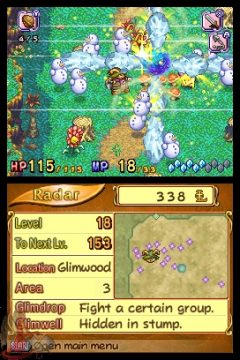 These dungeons are naturally filled with a number of battles. Though they are mostly hack and slash, it’s possible to trick or force enemies into traps, use a number of spells, and activate a fury gauge to mix things up a bit. It’s also possible to greatly customize one’s chosen character by carefully selecting an elemental spirit and organizing gems. Gems serve a variety of functions such as increasing statistics, preventing status effects, or allowing the bearer to use special weapon techniques. With swords, flails, bows, and hammers available, it’s up to the player to decide if they want to focus their gems on one weapon, spread them out over multiple weapons, or focus their limited gem space on something else entirely. Sadly, despite this added customization, battles generally aren’t usually that exciting due to the thousands of enemies that players must mindlessly hack through.

Most of these enemies are also quite easy for a well-prepared adventurer, though they can overwhelm players with sheer numbers at times. A large number of the game’s bosses are very low on the difficulty scale as well. Since it’s possible to team up with friends, it’s unlikely that Children of Mana will present much of a challenge to most players, provided they make good use of the gem system. Perhaps the largest source of difficulty arises from activating one of the game’s nastier traps by accident.

Though the controls are very tight in most instances, it can still be difficult to precisely cut down obstacles without hitting said traps that are scattered throughout the fields. One other problem is that it’s possible to send enemies flying all over the place, along with the hero, if care isn’t taken with certain weapons. Nevertheless, the rest of the interface is incredibly solid, and the localization is also quite good in most places. The touchscreen can also be used to quickly select items in the menu, but the game doesn’t require it.

Children of Mana is surprisingly short. Players should be able to finish it without too many problems in about twelve hours. There are a number of sidequests that can add a lot to the playtime, though. It’s also possible to spend quite a bit of time messing around with the gem system, once a large enough amount of money has been collected to allow players to experiment around with gem fusion. These factors can roughly double the length of the game, and the multiplayer mode can likely add more to this for players looking to get their money’s worth. 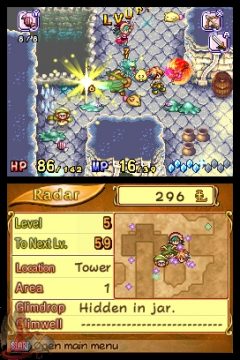 As with most short games that are heavily focused on dungeons, Children of Mana doesn’t have a particularly impressive story. There is a bit of a twist on the series’ general formula, but the rest is relatively generic and cliché. Character development is also very minimal; despite the fact that there are four characters to choose from, there is little emphasis on backstory.

Aside from the aforementioned twist on the Mana series’ usual storyline and the changes made to the gameplay, the majority of the game has been done before elsewhere. So, despite the fact that it takes an unexpected step for the series, Children of Mana is still relatively unoriginal.

Aesthetically, Children of Mana shines, particularly where visuals are concerned. The artwork is lovely, backgrounds look quite nice, bosses are visually impressive, and there are a number of anime cutscenes to be found throughout the game. The animation is slightly choppy in a few places, and the visuals flicker a bit at times, but they are very nice overall.

The music is also pretty nice in most places. Though it doesn’t stand out as much as the visuals, the background tracks still tend to do a decent job of conveying the theme that they’re attempting to. Unfortunately, some parts sound a little off, particularly in the town theme, but it’s not enough to detract much from the overall soundtrack’s quality.

Children of Mana features beautiful visuals and a solid interface. The new gem system offers a good deal of customization and is fun to play around with as well. On the downside, quests are relatively dull, and the story is underdeveloped. These important aspects being neglected detracts somewhat from the game’s overall performance. This isn’t to say that Children of Mana is a bad game, just that it isn’t as impressive as some of the other games in the series or that are available for the DS. Mana fans, and those that are able to gather a few friends to play with, will likely still enjoy this particular adventure.