Here’s Looking at You, Kid

As RPGamers, we love ourselves a good story. For many of us, a good story is the main reason we play RPGs. We get invested in the characters, hanging on their every word. We fall in love with the world, exploring every nook and cranny to discover its history and secrets. But how often are we actually told a story? Sure, we absorb plenty of story in the games we enjoy, but we absorb it through dialogue and cutscenes, in the way one might watch a film. Bastion, the first title from Supergiant Games, doesn’t do that. There are no cutscenes to watch, no dialogue and witty banter to listen to. Instead, the story is told the way one might tell a story around a campfire. There is only one voice, the narrator, and Bastion is his story.

The game follows the exploits of “The Kid,” a voiceless protagonist who is one of the few survivors of a world-ending event simply called the Calamity. The Kid arrives at the Bastion, a safe haven that was built by his people in case of an emergency, where he meets Rucks, an old man who looks like Sean Connery and sounds like Samuel L. Jackson. From there, the Kid heads out into the remnants of the world in search of the building blocks necessary to fix the Bastion. In the process, old conflicts reemerge and the true purpose of the Bastion is revealed.

What’s interesting about Bastion‘s story isn’t so much the story itself — in fact, the events of the game and characters involved aren’t particularly intriguing. Even the world itself goes largely unexplained, making it something of a mystery all the way to the end of the game. What makes it interesting is how it’s told. From start to finish, the entirety of the game is narrated by Rucks. There aren’t any cutscenes to interfere with the tale at all. The narration is overlaid with the game experience, with new parts of it emerging once the Kid reaches a certain point in the level. Performing certain actions can sometimes trigger an ancillary aside, which helps make the story flow. As the game reaches its finale, players will not only discover who Rucks is telling this story to, but also why, and it leads to a particularly intriguing twist that makes the ending far more meaningful.

The narration is terrifically written, and the voicework is equally fantastic. It’s exceedingly rare to go for more than a couple of minutes without hearing something new, and this is something that few, if any, other RPGs have ever managed to do. Bastion seamlessly combines its story with gameplay so that both are experienced simultaneously, and it does so extremely well. 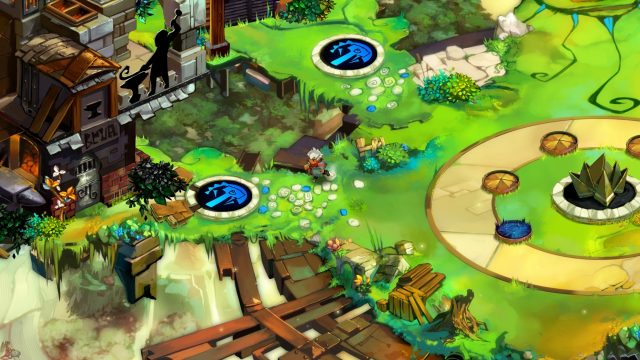 The Bastion, your new home.

Even more remarkable is that Bastion isn’t just a one-trick pony. The gameplay is well balanced, provides an adjustable challenge, and features an impressive array of combat and customization options. Essentially a hack ‘n’ slash brawler, the Kid can equip two weapons and one “secret skill” at a time. With a shield and an evasive roll for defensive measures, these five tools are used to fight off a wide assortment of enemies that change at certain points in the story.

As the game progresses, the Kid will discover a total of eleven weapons scattered throughout the remains of the old world. Each weapon is unique and has its own strengths and weaknesses, and players can pick and choose to create any combination of two. Players will also find crystals and special materials that can be used to upgrade weapons. In total, each weapon can be upgraded five times, and each time players will have to choose between two possible improvements. While this can sometimes be a difficult choice, it’s not a permanent one as once the upgrade is purchased, players can switch between either of them without cost simply by returning to the forge in the Bastion. This allows players to experiment freely with their weapons without fear of screwing them up. Players can choose from a wide array of special skills in the same way, though only one skill can be equipped at a time.

Further customization becomes available at the distillery, where the Kid can gain passive bonuses by drinking spirits. Each level, the Kid gets a new slot to put a bottle of spirits, and just like with the weapon upgrades, these can be changed at any time without cost, allowing players to freely experiment. The game maxes out at level ten, and with ten spirits slots, there’s a lot of possibilities for customization. Of course, a first playthrough is only likely to take one to level six.

One of the more unique features of Bastion is its adjustable difficulty settings. Eschewing the traditional “Easy, Normal, Hard” dynamic that most video games embrace, Bastion instead makes use of a shrine, wherein the Kid can pray to or denounce various gods. In essence, the shrine allows the player to pick and choose from a wide variety of different challenge modifiers which range from simply increasing enemy speed or power to more unusual traits such as dropping tiny explosives when they die. Activating challenge modifiers also increases experience gained as an added perk. Bastion also features a leaderboard, and players can climb this board by completing “Who Knows Where” challenges, special areas in which the player must survive twenty waves of foes while Rucks lays down some backstory. Having difficulty modifiers activated during these sequences lets players climb the boards faster. 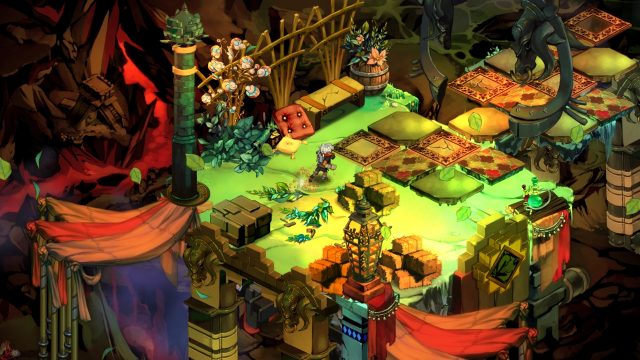 Bastion’s vibrant visual style makes it a joy to look at.

Aesthetic design is yet another area in which Bastion shines. The entire game is vibrant and colorful, and features a diverse array of areas to explore. Exploring is one of the more intriguing elements of its visual makeup, as the ground actually rises up and appears in front of the Kid’s feet, yet another feature of the world that’s never really explained, but just adds to the game’s many charms. The art style in particular warrants appreciation, with the entire game looking hand-painted.

Bastion‘s audio is equally impressive, but not only because of the terrific voicework of the narrator Rucks. The soundtrack is fantastic and memorable, featuring a diverse array of musical styles that include string-plucking western motifs, moody atmosphere pieces with an Arabian vibe, some unusual percussive techno, and a smattering of Asian influence. Of particular note is the beautiful vocal/acoustic guitar duet, “Build That Wall.” Not only does it serve as a terrific thematic piece for the entire game, but it’s hauntingly beautiful in its own right. It’s easily the best soundtrack encountered thus far this year.

The best thing about Xbox Live Arcade is that it seems to be fast becoming the home for creative game development, and Bastion is a poster child for this ever-growing movement. In the last few years we’ve seen many RPGs arrive on the Arcade, but Bastion is by far the cream of the crop. Ambitious, beautiful, and a blast to play, it’s everything an RPG should be. Even better, it’s only 1200 MS points, and with a solid ten to fifteen hours of gameplay, it’s a bargain. This is just Supergiant Games’ first title. I, for one, can’t wait to see what the studio does next.