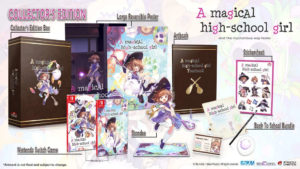 A Magical High School Girl sees players controlling the titular girl, who becomes lost in a magical world with just her magical abilities to protect her. Players are able to create their own spells, with elemental properties and effects determined by the name players enter for the new spell. A Magical High School Girl was released for PC in 2016, with an iOS version following in 2017 and the Nintendo Switch version releasing digitally in 2018.