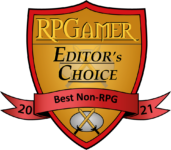 Metroid Dread has been in production on and off for the past sixteen years, and the wait was well worth it. The visuals, particularly the richly-detailed backgrounds, are stunning and add to the game’s atmosphere. Samus’s movement is very fluid and combat is not only fast, but genuinely fun and exciting. It is satisfying to pull off a well-timed counter as is finding power-ups and other secrets beneath the surface of the planet ZDR. Boss fights and avoiding the rogue E.M.M.I. robots can be tough, but the game’s autosave makes it easy to jump back in, hopefully with a better idea on how to win. While the story has never been Metroid’s strong suit, the subtle plot in Dread is still engaging, and some interesting twists are befitting of what is, apparently, the end of the main series. Metroid Dread is a fantastic game from beginning to end, and it’s understandable how many at RPGamer came to regard it as the best non-RPG for 2021. 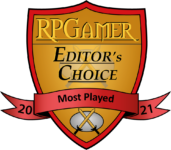 With the Nintendo Switch’s popularity still on the rise, it’s perhaps not surprising that our joint Most Played titles are two games on the system that are the next parts in established series that have been popular among the staff. Both Bravely Default II and Shin Megami Tensei V were quickly picked by staff members eager for more of what they had to offer. As the highest profile turn-based JRPGs from this year, they were always likely to draw in many experienced RPGamers and that turned out to be the case. Both games had plenty of fans behind them. 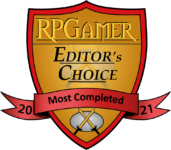 Those turn-based titles drew the most players, but it was Tales’ triumphant return that garnered the most completions. Bandai Namco used the break from the previous title to great effect, producing a game with a fantastic combat system, an eye-catching visual style, and a fascinating world. With the exception of the final dungeon, Tales of Arise produced a tight package that was tons of fun to churn through. The Tales series has always had its fans among the staff, but Tales of Arise ensured that it provided great satisfaction to veterans and newcomers alike.

by Cassandra Ramos and Alex Fuller

« Biggest Letdowns
Back to Intro
Michael A. Cunningham Memorial Award »