What’s Past Is Prologue

At first glance, Element: Space looks interesting. It’s a sci-fi RPG with an XCOM-derivative battle system derivative battle system that encourages smart use of every party member players take into each mission. Unfortunately, while its tactical combat is enjoyable, the rest of game is sadly not up to par, as an esoteric setting is joined by a lacklustre plot and abundant technical challenges.

Element: Space takes place in a future where humanity has spread out across three different star systems, inhabiting planets and moons like Venus and Europa. These factions are somewhat bizarrely organised, with real-world regions getting their own planets rather than each world developing its own identity. Players control Captain Christopher Pietham, who is in charge of security at a new starship that’s set to become the headquarters of the Galactic Congress. However, the ship is attacked ahead of its launch by shadowy organisation Tempest, who manage to put the blame on Pietham. Pietham, his superior, and an AI-controlled robot manage to escape and set out to expose Tempest’s nefarious deeds.

Element: Space has some decent character-focused story elements, particularly those missions where players recruit new party members, as well as their on-board events involving Pietham and other members. The overall plot is less interesting, and features a “to be continued” ending with the immediately preceding events being highly predictable. There’s very little build up to that finale, as Pietham and his crew undertake an assortment of disconnected missions until suddenly the closing act appears after the 12-15 hour mark. There is a text-based epilogue reel based on how players’ relationships with other factions and their party members end up, but it offers very little in the way of closure. 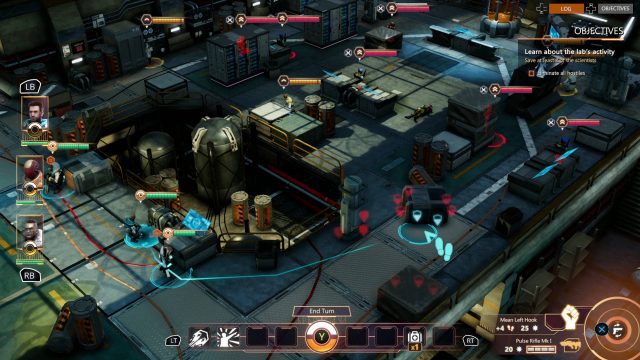 The game’s combat is pretty interesting, but let down by what surrounds it.

The turn-based tactical combat is easily the game’s most engaging element. Each combatant gets a major and minor action, with attacking or using most skills requiring the former, while moving uses up the latter. There is lots of freedom to move around, as only certain weapons will automatically fire on anyone running within range, and setting up an overwatch requires forgoing an attack and is incredibly easily bypassed. This makes it a game of constantly moving around to flank and pick off enemies. Depending on how large it is, cover can prevent damage from certain directions or reduce the accuracy to 50%, but cover can also be destroyed in just two hits. Other than for not getting blasted from all sides, using cover is most useful for making enemies move around for their attacks, putting them in range to get flanked the next turn.

While perhaps not resulting in a realistic firefight, the constant movement means that it keeps players engaged and each turn always needs to be thought through. A good selection of potential abilities for Pietham and the eight party members that can be recruited provides plenty of options for players to utilise, many of which let the team work together, such as Zero’s ability to destroy an enemy’s shield or Alice’s AoE and push-back attacks.

Though enjoyable and holding up on its own for the game’s length, the combat system can get a bit repetitive. The primary method the game has for upping the challenge appears to be overwhelming the player by sending out more reinforcements. There are at least some slightly different win conditions other than the usual “defeat everyone” as well as a few different enemy types, which gives some slight variations to missions, though they usually require minor tactical adjustments rather than complete rethinks. 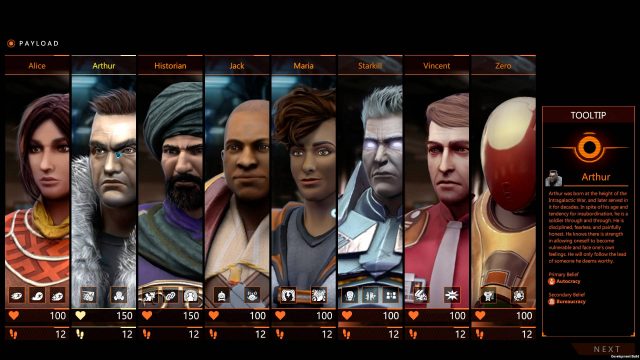 New party members are recruited by selecting and completing their story missions.

Sadly, the game is beset by technical problems, the least annoying of which are massive load times. Every lost fight immediately caused the game to freeze before any game over or retry message could be displayed. Meanwhile, combatants can suffer unknown issues that cause them to fail to attack, though this usually works in the player’s favour. One particular combat ability also appeared to cause the game to freeze at a later turn. Thankfully, the autosave means that players generally only have to redo a single battle. Research indicates that such issues are not limited to the PlayStation 4 port this review is based on and are simply a fact of the game as it is now.

The game did not have voice acting for its initial PC launch, but it has been added for its console release, including on the PC version. The performances are not of the highest quality, but they certainly liven up the event scenes and give them some B-movie charm. They do showcase the game’s visual limitations, however, as events back on the ship are fully voiced, but show the character models as unflinchingly static-mouthed while they generically rock around. Just leaving them as portraits while the voicing did the work would be less distracting. Combat and the arenas look decent enough, without anything hugely noteworthy.

Though the combat holds up, it’s just too difficult to find a way to recommend Element: Space as a whole. There’s not much of interest from a narrative standpoint, while all of the good points about the gameplay are offset by the technical problems. It’s a shame, as there’s a good base underneath it, but even with giving leeway based on the small size of the development team, the annoyances currently outweigh the good.